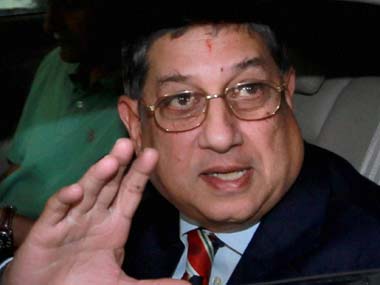 New Delhi: Neither the BCCI, nor Srinivasan can steer clear of making headlines. After the latest controversy regarding the snooping of some top BCCI officials came to the fore, thereâ€™s a new twist in the tale.

According to a report publishedÂ on TuesdayÂ in the English daily, a former BCCI official claimed that the BCCI, headed by Srinivasan, never spied on its members, but it was just a reaction to a curious case of hacking problem that had surfaced after Lalit Modiâ€™s ouster from the board.

In the meantime, the newly-elected BCCI board members expressed interest in solving the issue. BCCI secretary, Anurag Thakur, had already issued a notice to the former interim board president Shivlal Yadav and former secretary Sanjay Patel, asking them to provide the details of expenses incurred on information technology, which is still awaited.

In fact, the former board official also revealed that the England & Wales Cricket Board (ECB) had suggested BCCI to hire the services of an England-based company, which provides services to many government agencies in the United States of America.

â€œThere had been many instances when we sent internal e-mails and after few minutes, we saw tweets about it. A London based company was hired to protect BCCIâ€™s mails and there was no spying, â€ the BCCI official said on condition of anonymity.