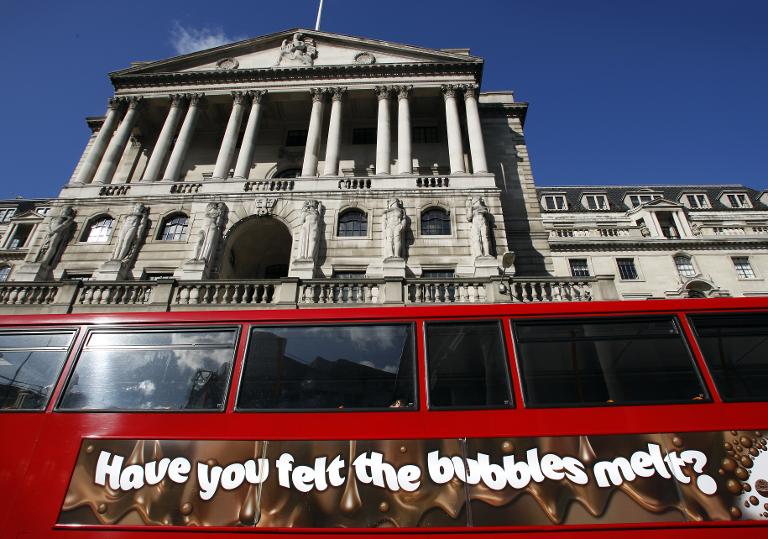 The Bank of England froze interest rates at a record low 0.50 percent on Monday in the first monetary policy decision since the Conservatives triumphed in the general election.

The meeting was held Thursday and Friday but the outcome by the independent BoE was delayed due to last week’s vote — which was unexpectedly won by Prime Minister David Cameron’s Conservative party.

Borrowing costs are now likely to stay on hold for the rest of the year, economists said, due to slowing economic growth and the prospect of more harsh austerity measures from Cameron in the wake of the May 7 election.

“The BoEâ€™s Monetary Policy Committee (MPC)… voted to maintain Bank Rate at 0.50 percent,” it said in a statement.

Economists said the MPC had chosen to continue its wait-and-see policy, particularly in light of an economic slowdown in the first quarter of 2015.

Gross domestic product (GDP) expanded 0.3 percent between January and March. That dashed expectations of 0.5-percent growth, after 0.6 percent in the final quarter of 2014.

The election was also an endorsement of Cameron’s austerity policies and will likely see a continuation of cuts to public spending as he seeks to reduce a budget deficit of nearly Â£90 billion.

“Since the first estimate of Q1 GDP has cast some doubt over the recoveryâ€™s health, the MPC is likely to have voted unanimously again at this monthâ€™s meeting to keep interest rates on hold,” said Samuel Tombs, analyst at Capital Economics research group.

“And while we think that the recovery is secure, the tough fiscal squeeze that is now all but certain to hit the economy and the subdued outlook for inflation should ensure that monetary policy is tightened only gradually from next year.”

Britain is meanwhile battling the risk of deflation, due partly to the recent sharp slump in world oil prices.

The 12-month Consumer Price Index (CPI) inflation rate languished at zero in February and March — rather than turning negative as some expected — meaning that Britain has avoided deflation for now.

“The BoE will … likely retain the view that while deflation remains possible in the near term, consumer price inflation will start trending up from the third quarter,” noted IHS Global Insight economist Howard Archer.

The bank — whose main task is to keep inflation close to a target of 2.0 percent — has already warned that sliding oil costs and supermarket price wars will spark negative inflation at some point in the coming months.

Cameron swept back to power last week after an unexpected election victory handed his Conservative party a narrow majority in parliament for the first time in almost two decades.

The Conservatives capitalised on their stewardship of the economy, which has staged a solid recovery since 2010 despite the first-quarter slowdown.

However, the Liberal Democrats were ravaged at the ballot box, hurt by the compromises they had to make in five years as junior coalition partners in Cameron’s administration.

The result has been well received by the markets, as investors welcomed the stability and pro-business policies of the Conservatives.

Minutes from last week’s MPC gathering will be published on May 20.

“The votes wonâ€™t be known for a couple of weeks but chances are that it was another 9-0 in favour of keeping rates on hold until CPI and wage growth show sustained gains,” said CMC Markets analyst Jasper Lawler.

The BoE will also reveal more details on Wednesday with the publication of its latest quarterly economic forecasts.