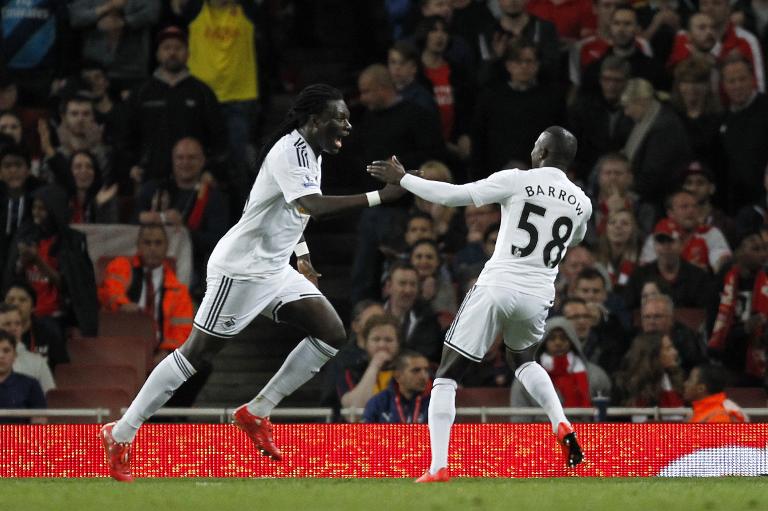 Arsenal had won nine of their previous 10 games, only dropping points in a goalless draw with champions Chelsea, but after being kept at bay by their former goalkeeper Lukasz Fabianski, they were undone in the 85th minute.

Gomis, a 74th-minute replacement for Ki Sung-yueng, sent a header towards goal and although Arsenal goalkeeper David Ospina appeared to have clawed it away, the Goal Decision System showed that the ball had in fact crossed the line.

“We were unlucky against a team who refused to play completely and just defended,” complained Arsenal manager Arsene Wenger.

“We rushed our finishing because we had plenty of chances in the second half. It was just a question of scoring a goal.”

It was Arsenal’s first home defeat in the league since November, when they lost 2-1 to Manchester United, two weeks after going down by the same scoreline at Swansea.

United can overtake Arsenal and take possession of third place by beating them at Old Trafford on Sunday, although Wenger’s side retain a game in hand at home to relegation-threatened Sunderland.

Garry Monk’s Swansea, meanwhile, are now a point off seventh place, which will yield a Europa League spot if Arsenal beat Aston Villa in the FA Cup final on May 30, and two points below sixth-place Tottenham Hotspur.

“Why shouldn’t we push for that?” said Monk. “Today showed what we’re about and we’ll see where the last two games take us.

“We worked all week on our plan. The players were magnificent and carried it out to the letter.”

With Aaron Ramsey overcoming a knock sustained in last week’s 3-1 win at Hull City, Arsenal fielded an unchanged team for the fifth league game running, something that last happened in January 1994.

It was a sign of Wenger’s satisfaction with recent performances, but although Arsenal dominated possession in the first half, Swansea’s well-organised 4-1-4-1 system kept them at bay.

Ramsey set up Olivier Giroud for an early header that landed on the roof of the net, but Swansea, who deployed Gylfi Sigurdsson as a lone forward, carried menace on the break.

Ospina was required to save from Angel Rangel and Jonjo Shelvey, and though willing to drop deep in search of the ball, Arsenal dangermen Alexis Sanchez and Mesut Ozil struggled to make inroads.

But Swansea began to commit more men forward after the interval, and belatedly Arsenal had some grass to run onto.

A loose touch by Federico Fernandez let in Sanchez, who side-footed wide, before Giroud worked former team-mate Fabianski with a tame, low shot.

Ozil released Ramsey, who sent Wales colleague Neil Taylor one way and then the other, only to lash his shot into the side-netting, while Fabianski saved a snapshot from Santi Cazorla.

With 23 minutes left, Wenger introduced Jack Wilshere in place of Francis Coquelin to add yet more guile to the hosts’ midfield and Theo Walcott followed soon after, replacing Giroud.

Still Fabianski denied his former team-mates, first gathering a prodded effort from Walcott and then spreading himself at his near post to thwart Nacho Monreal, who had motored onto an incisive pass from Sanchez.

It was turning into a bravura performance by the 30-year-old Poland international, who left the Emirates Stadium for South Wales in 2014, and there was more to come.

He repelled efforts from Ramsey and Cazorla either side of a smart double-save that left Sanchez and Walcott with their heads in their hands.

Frustration turned to disbelief minutes later when Jefferson Montero clipped a cross into the box from the Swansea left and Ospina was unable to prevent Gomis’s downward header from crossing the line.