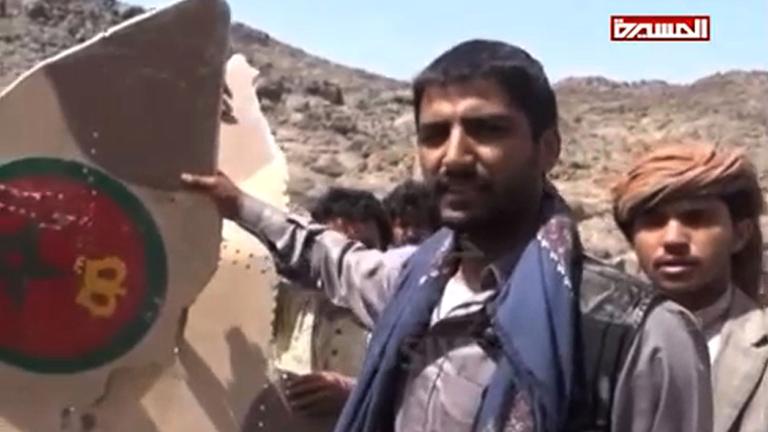 Yemeni rebels said on Monday they shot down a fighter jet as Saudi-led coalition air strikes intensified a day ahead of a hoped-for five-day humanitarian truce.

Morocco announced that one of its warplanes taking part in operations against the rebels was missing along with its pilot, and that a search was underway.

Coalition warplanes hit Iran-backed rebels in their northern Saada stronghold, military camps, and weapons depots around the capital Sanaa and in other provinces, residents said.

“A second plane which was flying in formation was not able to see whether the pilot ejected,” it added.

A Saudi official said that the warplane was “certainly on Yemeni territory and had a single pilot on board”,

The Huthi rebel television station Al-Masirah said a coalition aircraft crashed in the Wadi Nushur area in Saada, claiming that “air defence operated by tribesmen” shot it down.

It broadcast still images that it said were of tribesmen celebrating around the wreckage of a plane bearing a Moroccan flag.

The coalition has declared the entire rebel stronghold of Saada province to be a military target after Huthi bombardment of Saudi towns across the border caused several deaths.

Al-Masirah reported “more than 20 raids since the morning” by coalition aircraft across Saada.

“Since the early morning, jets, artillery, and rockets have been pounding Saada” from the Saudi side of the border, one resident told AFP, asking not to be identified.

Aid agencies say some 70,000 civilians have fled the province bordering Saudi Arabia, but that many more remain trapped by the coalition air and artillery bombardment because of a lack of fuel for transport.

“We are living under a very difficult and unprecedented humanitarian situation,” said another Saada resident, who also asked to remain anonymous.

“We want to leave Saada but can’t due to the financial situation and the shortage of fuel. The Huthis are also trying to stop civilians from fleeing.”

Human Rights Watch urged all parties in the Yemeni conflict to allow fuel to reach the population “whether or not a proposed ceasefire takes effect” on Tuesday at 2000 GMT.

“The rising civilian casualties from the fighting could become dwarfed by the harm caused to civilians by the coalition blockade on fuel, if it continues,” warned HRW’s deputy MENA director Joe Stork.

A ship chartered by the UN’s World Food Programme docked Saturday in the western port of Hodeida, bringing fuel the organisation said would help provide “a new humanitarian lifeline for civilians impacted by the conflict”.

Ahead of the proposed ceasefire, seven consecutive air strikes hit rebel positions in the southern province of Shabwa, residents said.

In second city Aden, at least 19 people were killed and 93 were wounded, including women and children, in fighting on Sunday between rebels and supporters of exiled President Abedrabbo Mansour Hadi, a medical official said.

The latest violence comes ahead of a five-day truce Riyadh has offered to start from 11 pm local time on Tuesday to enable aid deliveries.

It would be the first pause in air raids since the coalition campaign began on March 26.

Saudi Arabia has stressed that the offer is conditional on the rebels reciprocating and not exploiting the ceasefire for military advantage.

Coalition aircraft flew a record number of sorties — more than 130 from Friday to Saturday — after declaring the rebels had crossed a “red line” in their deadly mortar and rocket bombardments of Saudi Arabia last week.

The United Nations says 1,400 people have died in the conflict since late March.

On Sunday, warplanes hit the Sanaa residence of ousted president Ali Abdullah Saleh, who is accused of orchestrating the alliance between renegade army units and the rebels.

These troops, who remained loyal to Saleh after he was forced from power in early 2012, played a major part in the Iran-backed rebels’ capture of swathes of the country.

Saleh’s private television channel Yemen Today quoted him as calling on supporters to “carry arms… to confront this aggression”.

The call on Sunday came despite pro-Saleh troops agreeing to the US-backed truce, which the Huthis promised they will respond to “positively”.