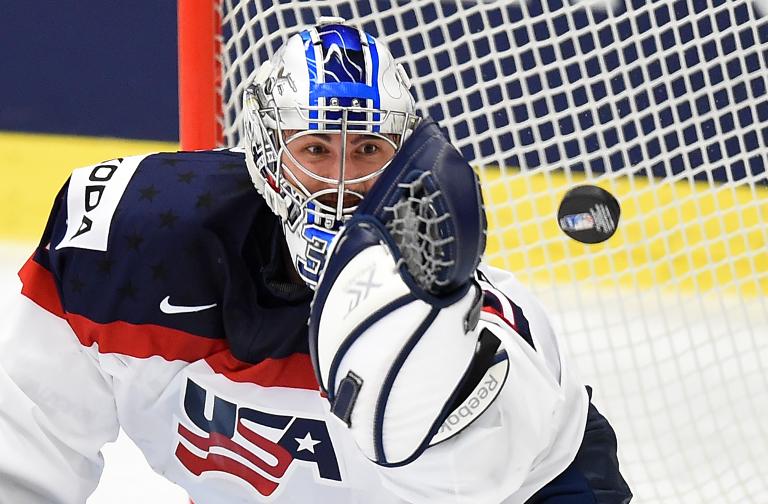 The USA, Czech Republic and Russia joined Canada and Sweden in the quarter-finals of the ice hockey world championships on Sunday.

Finland did not play but also made it to the last-eight too, leaving only two quarter-final places up for grabs.

New York Islanders forward Brock Nelson improved his record at the tournament to six goals after scoring twice and adding an assist to help the USA beat Slovenia 3-1.

Nelson put the USA 2-0 up with goals in the fifth and 17th minutes.

Slovenian forward Ales Music narrowed the difference on 27 minutes as the Americans lost momentum in the second period, but Boston University forward Jack Eichel added a third one for the USA early into the final period, tipping in Nelson’s shot.

“Our line has been working well for quite a few games now,” Nelson told the championship website.

“I don’t know what the secret is — it would be nice if we did — but I think we’ve played well from the get-go to create chances and capitalize on them.”

In Group B’s other game, defending champions Russia struggled past Slovakia 3-2 in overtime.

Los Angeles Kings forward Marian Gaborik levelled the score on 50 minutes to take the game into overtime which lasted just over two minutes when Artemi Panarin handed Russia two points for a win.

The USA lead Group B, played in the eastern Czech city of Ostrava, ahead of Russia, Finland and Belarus, while Slovenia are relegated from the worlds as they sit last in the group with zero points from six games.

In Group A played in Prague, Canada swept Switzerland 7-2.

Canada then dominated the game as Nathan MacKinnon, Aaron Ekblad, Jordan Eberle and Cody Eakin made it 5-1 before the second intermission.

Damien Brunner scored for Switzerland at the beginning of the final period, but Sean Couturier and Claude Giroux dashed Switzerland’s hopes of a decent loss.

Earlier on Sunday, the Czech Republic beat Germany 4-2 after trailing their rivals twice.

Voracek then made up for his mistake with a power-play goal in the 28th minute and Florida wing Jaromir Jagr rounded off the score four minutes from the end.

Jagr once again stretched his record as the oldest player ever to score at the worlds to 43 years and 85 days. He also recorded an assist, setting up Voracek with a spectacular blind pass.

Canada lead Group A with a perfect record ahead of Sweden, the Czech Republic and Switzerland.