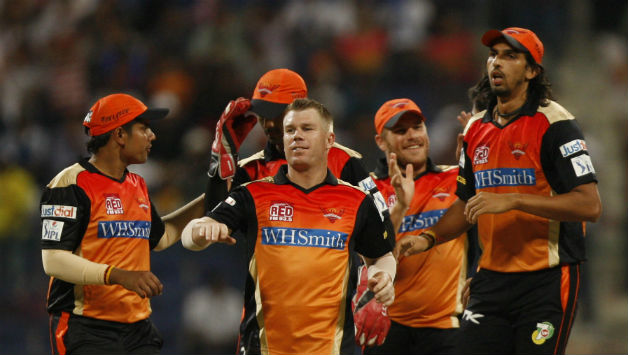 Hyderabad: Having found a place among the top-four teams in the ongoing Indian Premier League (IPL) T20 tournament, Sunrisers Hyderabad would look to consolidate their gains when they take on beleaguered Kings XI Punjab at the Rajiv Gandhi International cricket stadium on Monday.

After struggling to find the right momentum, the David Warner-led side improved their stock in the recent matches and they now stand at fourth position in the points table following their six-run victory over Delhi Daredevils in Raipur on Saturday.

The weak area for Sunrisers have been their middle-order, which was expected to complement the effort of their swashbuckling openers, Warner and Shikhar Dhawan.

However, the middle-order batsmen like Moises Henriques, Eoin Morgan and Naman Ojha have come up with impressive performances in recent matches. Leg-spinner Karn Sharma has also come in handy with the bat.

Henriques’ unbeaten 74 runs in 46 balls led the team to score a significant win against Delhi Daredevils, which brought the team in real contention for the play-offs.

The star-studded bowling attack, including Dale Steyn, Trent Boult, Bhunveshwar Kumar, Ishant Sharma and Karn has been the potent weapon of the Hyderabad-based side.

The upbeat mood in the camp and the advantage of playing at home, is sure to give any rival team a run for their money.

SRH beat the table-toppers Chennai Super Kings in their last home match on May 2.

The Kings XI Punjab, on the other hand, are languishing at the bottom of the points table having won just two matches and four points in the tournament.

The Punjab side have not been able to play to their full potential despite having big names like Glenn Maxwell and Mitchell Johnson.

Though KXIP have only a few matches left in the tournament, they would like to salvage some pride by defeating SRH in their own den.

Punjab batsmen like Murali Vijay, Manan Vohra, Wriddhiman Saha, Maxwell and David Miller need to come up with a competitive show against the famed SRH bowling to make matters difficult for the hosts.

It would be no mean task for KXIP bowlers either as top SRH batsmen like captain David Warner, Dhawan, Henriques and Morgan would be determined to keep the winning momentum going and secure a play-off berth.

Even on the head-to-head count, SRH have an edge over KXIP with 3-2 win-loss record in five games.