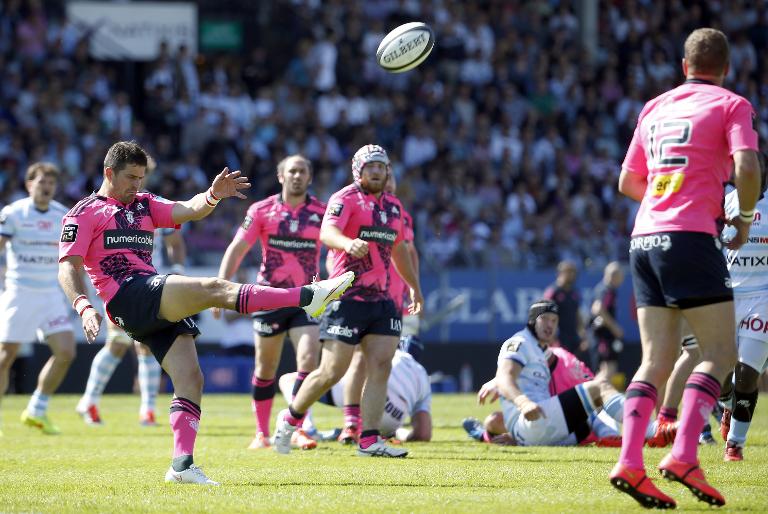 The win leaves Stade in fourth in the table behind leaders Toulon, Clermont and Toulouse, with Oyonnax in fifth above Racing in sixth.

With just two games of the regular season to play, the pressure will be on in the fight to nail down a spot in the top six for the end-of-season play-offs.

The Italy No 8 had been pulled back by Bernard Le Roux as he approached Dulin, but international referee Jerome Garces had no hesitation in brandishing red after checking television replays.

“I’m disappointed with the red card,” Parisse told Canal+ television. “But to win here away from home with 14 men is great.

A man short for three-quarters of the match, Stade mounted a robust rearguard action, boosted by the unerring boot of Steyn, who has had to play second fiddle to the now-injured Jules Plisson for most of the season but bagged 23 points in brilliant sunshine in northwest Paris.

After Parisse had been dismissed, Sexton and Steyn notched up their third penalties.

As Stade took the game to Racing, referee Garces showed home prop Luc Ducalcon yellow after a number of infringements.

Steyn booted his fourth penalty on the half-hour from 52 metres, with the Racing scrum in disarray in Ducalcon’s absence, the South African going on to make it five from five on the stroke of half-time.

Steyn, who has amassed 688 points in 59 Tests for the Springboks (only 18 of which were losses, eight times to Australia and seven times by New Zealand), added a sixth immediately into the second period.

And then the killer blow came just two minutes later when Stade scrum-half Julien Dupuy’s deft chip into the corner was gathered acrobatically by winger Jeremy Sinzalle who did well to ground the ball in the corner despite Juan Imhoff’s attentions.

Steyn made no mistake with the touchline conversion.

Stade were reduced to 13 men in the 54th minute after Dupuy was yellow-carded for a cynical knock-on as Racing attacked.

Sexton spurned a shot at the posts and kicked for touch, scrum-half Maxime Machenaud eventually scrambling over for a try from the driven maul.

Steyn made a hash of two penalty attempts before nailing a seventh to stretch the visitors’ lead to nine points in what was ultimately an emphatic away victory and city bragging rights.

In Saturday’s action, Toulon showed no signs of a hangover after their unprecedented third consecutive European title with a five-try 37-21 demolition of struggling Castres.

Clermont shrugged off their European misery with a 37-17 win at Grenoble which kept them in second spot while Toulouse, the 17-time champions, maintained their push for a semi-final place with a nine-try 67-19 rout of Brive to go third.

Bordeaux kept their play-off hopes alive with a 26-23 win over Oyonnax.