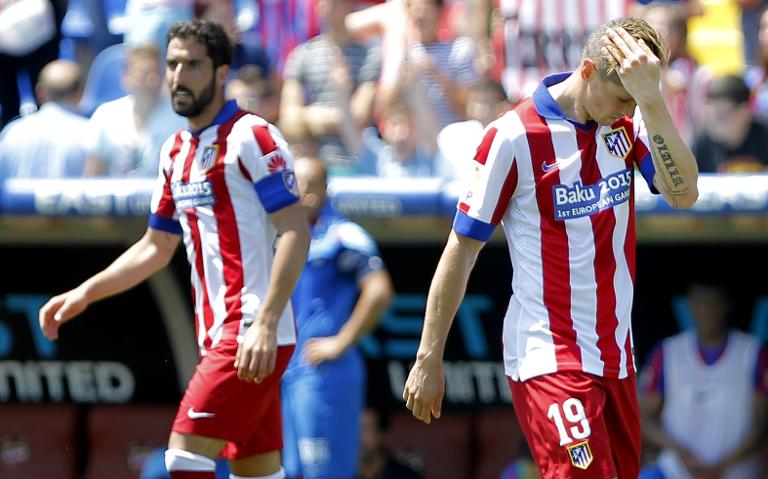 Atletico Madrid secured their place in the Champions League for next season despite only managing a 2-2 draw at Levante on Sunday as Sevilla were held 1-1 at Celta Vigo.

A point for both sides means that Atletico lead the Europa League champions by seven points with just two games remaining.

Atletico now need three points from their final two fixtures at home to Barcelona and away to Granada to guarantee third place ahead of Valencia and avoid a qualifier for the group stages in August.

The La Liga champions started brightly at the Ciutat de Valencia, but couldn’t find a way past Diego Marino as Mario Mandzukic’s three-month goal drought continued when the Levante ‘keeper got down brilliantly to save the Croatian’s header nine minutes in.

Juanfran then made a fine clearance at the other end to prevent Jose Luis Morales applying the finishing touch to an incisive counter-attack by the hosts.

Levante did go in front just after the half-hour mark when Miranda’s poor defensive header presented the ball to Ivan Lopez as his low cross left Barral with the easiest of finishes for his 13th goal of the season.

Atletico responded immediately as left-back Siqueira swept home his first goal for the club since joining from Benfica last summer from Tiago’s cross.

The visitors were again the dominant side for much of the second period, but were caught out once more when another simple cross from Lopez found Uche unmarked and the ball ricocheted into the net off the Nigerian after his initial effort had been saved by Jan Oblak.

Fernando Torres replaced Mandzukic for the final half hour and provided the finishing touch that the former Bayern striker has lacked recently 11 minutes from time as he rose highest to bullet home Koke’s corner.

Atletico could have snatched all three points towards the end, but Marino made another fine stop to deny Jose Maria Gimenez as Levante edged closer to sealing their La Liga status for a sixth consecutive season.

Sevilla could still qualify directly into the group stages of next season’s Champions League themselves should they go onto retain the Europa League.

But their hopes of doing so through La Liga took another blow as Celta remained in the fight for a European place of their own.

Kevin Gameiro fired the visitors into an early lead with a brilliant finish after a neat one-two with Iago Aspas.

However, Santi Mina levelled from the penalty spot after Alejandro Arribas had felled Charles inside the area just before the hour mark.

Celta now trail Malaga by three points in the race for seventh place after they edged an Andalusian derby against Almeria 2-1.

Villarreal are guaranteed a place in next season’s Europa League as Joel Campbell’s solitary goal handed them a first victory in 10 league games against Elche.