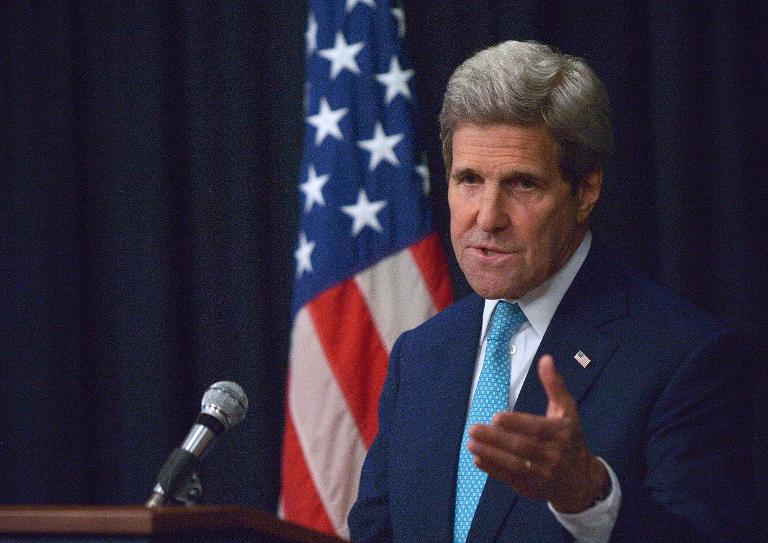 President Vladimir Putin is expected Tuesday to host US Secretary of State John Kerry for crucial talks in Sochi amid tensions over Ukraine, during the top US diplomat’s first visit to Russia since the start of the crisis.

Ties between Moscow and Washington collapsed after Russia seized Crimea and buttressed separatists in eastern Ukraine but after a year of raging tensions signs are emerging that both Russia and the West may be ready to seek detente.

President Vladimir Putin has refused to budge on Ukraine but has signalled his readiness to mend ties with Washington and Brussels as Russia chafes under the burden of biting Western sanctions.

The US State Department said on Monday that Kerry would meet with his Russian counterpart Sergei Lavrov and Putin, who is spending the week at his summer residence in Sochi.

“This trip is part of our ongoing effort to maintain direct lines of communication with senior Russian officials and to ensure US views are clearly conveyed,” said spokeswoman Marie Harf.

It will be Kerry’s first visit to Russia in two years.

“We expect that Secretary of State Kerry’s visit to Russia will serve the normalisation of bilateral ties on which global stability depends to a large extent,” the Russian foreign ministry said for its part.

Kerry’s high-stakes visit comes as Russia appears to have put the worst of the fallout from the Ukraine crisis behind it, with the rouble rebounding somewhat and Putin enjoying popular support at home.

In a wide-ranging statement, the Russian foreign ministry said US companies wanted to do business in Russia despite Western sanctions and added that the political chill should not affect human ties.

“Even under pressure from the White House, American business is in no rush to leave our market,” the foreign ministry said.

“Boeing, Ford, John Deere, Alcoa, Coca Cola, PepsiCo, Mars, ExxonMobil, Chevron, ConocoPhillips and other companies that have invested significant funds here would like to retain their position in Russia.”

Putin himself used similar rhetoric when he called for an improvement in ties with Germany during Chancellor Angela Merkel’s visit to Moscow on Sunday.

“Entrepreneurs are pragmatic people, that’s why they are not leaving the Russian market,” Putin said.

The Russian foreign ministry reeled off a litany of complaints about US policies ranging from abuse of Russian orphans by US adoptive parents to NATO’s eastward expansion and the Ukraine crisis, a hot-button issue expected to top the agenda.

Last year’s popular uprising in Ukraine that ousted a Kremlin-backed president sparked a diplomatic crisis and led Moscow to wrest the peninsula of Crimea from Kiev’s control and support Russian-speaking separatists in eastern Ukraine.

Kiev and the West accuse Putin’s Kremlin of masterminding the conflict that has killed more than 6,100 people in just over a year, and have slapped several rounds of sanctions against Russia.

An informed source told the Interfax news agency that Russia expected Washington to play a more high-profile role in resolving the Ukraine crisis.

“It’s important that the United States begin to play a more constructive role in the Ukrainian settlement, that they force Kiev to enter into a direct dialogue with the Donetsk People’s Republic and Lugansk People’s Republic,” the source said, referring to the rebel-controlled regions.

“Let’s see what the Secretary of State will be able to offer in this context.”

The source also said Moscow would urge Washington to refrain from supplying Kiev with lethal weapons.

“For us it’s a principal issue.”

Despite a truce brokered by the West and Putin in February, Kiev and the insurgents accuse each other of violating the ceasefire deal.

Kerry’s visit comes after US President Barack Obama skipped Russia’s celebrations of the 70th anniversary of the Soviet victory over Nazi Germany in what was widely seen as a snub over Moscow’s meddling in Ukraine.

Germany’s Merkel, too, ducked out of attending the Red Square military parade on May 9 but visited Moscow on Sunday to pay tribute to the Soviet dead.

Putin pointedly thanked the Soviet Union’s Western allies for their contribution to the defeat of Nazi Germany in WWII during his Victory Day address and shunned overtly aggressive rhetoric.

The source, speaking to Interfax, said ties between Moscow and Washington had hugely suffered over the past year.

“Americans destroyed nearly everything,” the source said. “Decades will be needed to restore bilateral ties.”

From Sochi, Kerry will travel to Antalya, Turkey for a NATO meeting.