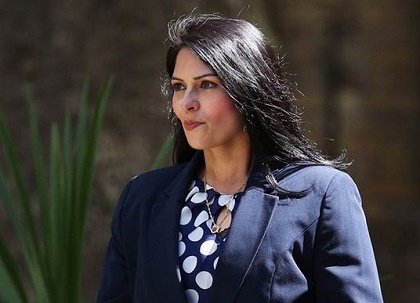 London: UKÂ Prime Minister David Cameron on Monday promoted one of Britain’s most prominent Indian-origin MPs Priti Patel by making her the new Employment Minister, as he unveiled the first all-Conservative Cabinet in nearly 20 years with his top four aides retaining their previous portfolios.Â

The senior-most berths in the Cabinet were confirmed soon after the election results were out with Chancellor George Osborne, Home Secretary Theresa May, Foreign Secretary Philip Hammond and Defence Secretary Michael Fallon being re-confirmed in their respective posts.Â

Patel, who was re-elected from Witham in Essex with a big majority in the May 7 general election, replaces another female MP in the Cabinet, Esther McVey, who lost in the polls.Â

“A real privilege to be appointed as Minister of State for Employment at the Department for Work and Pensions,” the 43-year-old said in a Twitter message.Â

While the London-born mother of one will not be in charge of the Department for Work and Pensions, she has been given a Cabinet rank as a promotion from her previous role as Exchequer Secretary to the Treasury.Â

It remains to be seen if she will also carry on in her honorary role as the British Prime Minister’s Indian Diaspora Champion.Â

Her appointment reflects Cameron’s plans to shake up the party’s old fashioned all-male image and have a significant number of women around the Cabinet table.Â

Cameron had already confirmed Nicky Morgan in her previous post as Secretary of State for Education and Minister for Women and Equalities.Â

Key announcements today included the son of a Pakistani bus driver, Sajid Javid, moving from Culture Secretary to Secretary of State for Business and London Mayor Boris Johnson being given a ministerial rank without a portfolio.Â

Johnson, widely seen as a Conservative party leadership contender, will attend Political Cabinet until he completes his term as mayor in 2016 when he is expected to be given an official portfolio.