Only the brave and desperate return to town freed from Boko Haram | Newsmobile
Sunday, June 26, 2022 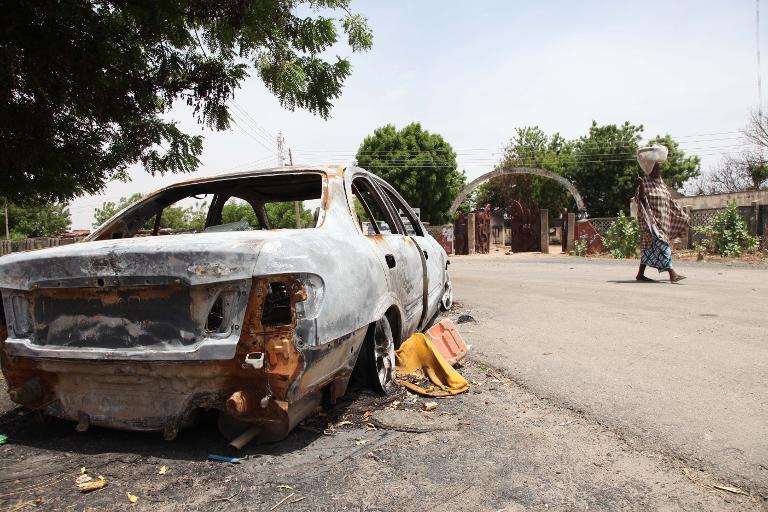 Spent bullets crunch underfoot, a raided bank lies in ruins and burned out cars and motorbikes dot the streets.

Michika may now be free from Boko Haram but the town in the remote north of Nigeria’s Adamawa state is eerily quiet and signs of the militants’ presence are everywhere.

“There is no God but Allah” is scrawled in Arabic on walls with chalk or paint. English and Hausa-language signs have been scrubbed out by the Islamists, who believed them to be “sinful”, locals say.

Angelina Linus fled Michika when Boko Haram arrived last September and spent seven months hiding in the mountains that overlook the town and Cameroon beyond. She returned in April when it was liberated.

But even though the rebels have gone the almost deserted town is still under threat, she said.

“We need help before the rains. We don’t have anything. No medicine, no mattresses… everything is required,” the 38-year-old told AFP.

“Two of my four children are in (the state capital) Yola. I need them back but I have nothing to feed them, so they are better off staying there.”

“The rains may come but there’s no way to farm because we don’t have anything to cultivate,” added Jamila Gambo, as civilian vigilantes manned a checkpoint with home-made weapons.

Michika’s only link with communities further south and the state capital Yola 230 kilometres away (180 miles) is a single, potholed road.

Further down the road, sections of a road bridge lie like a concertina, blown up by the Nigerian Army to try to halt the militants’ progress.

Cars, lorries and motorbikes are forced off the tarmac road down a dirt track to the banks of a river.

Young men and boys wade in to push vehicles up the opposite side. Gears scrape and engines strain as the wheels emerge from the water.

“By the time it rains again, this river will be flooded. They will be cut off,” said Jacob Zambwa, a 45-year-old civil servant, pointing towards Michika.

“There’s nothing we can do. We don’t have the funds to put a temporary bridge over the river.”

Two other bridges further south have also been blown up, forcing vehicles over currently dry riverbeds.

Without the Boko Haram conflict, the parcels of flat farmland on either side of the road would be busy with preparations for the planting of crops such as beans, maize and sugar cane.

But there are few locals to be seen and only the occasional fire burning away the scrub and dry leaves from the parched earth.

Reminders of the fighting, however, are everywhere.

A Soviet-era T55 tank, seized from the army and stencilled with the militants’ black and white insignia, rusts in the southbound lane in the town of Bazza.

On the outskirts of Uba, an evangelical church has been bombed to rubble. In Mararabar, a mosque is damaged. Walls almost everywhere are pockmarked by bullets and houses scorched by fire.

Many are those who fled Boko Haram, either to the homes of family members or friends elsewhere in the state and further afield or to internally displaced persons’ (IDP) camps in Yola.

The army says it has driven Boko Haram out of Adamawa, spurring many to come back, to assess for the first time the damage to their homes and resume their lives.

Nearly three-quarters of the population are now back in the state’s commercial capital, Mubi, which fell to Boko Haram last October and was recaptured in December with little resistance.

Traders are back while staff at the Adamawa State University, which is based in the town, are set to return next week.

But not many people from Michika or Madagali, further to the north, have dared to return yet. Those that have made the journey out of necessity — to plant crops to have food for next year.

But they face a precarious future, with their homes bombed out and possessions looted. In Michika, the town’s only medical facility closed three weeks ago because of lack of drugs.

The Adamawa Peace Initiative, which has been helping to feed hundreds of thousands of IDPs in Yola, is hoping to raise one billion naira ($5 million, 4.5 million euros) to rebuild the worst-affected communities.

Imam Dauda Bello, from the group, described the situation in the north of the state as “desperate”. “The rains come in two to three weeks,” he said. “Something needs to be done now.”