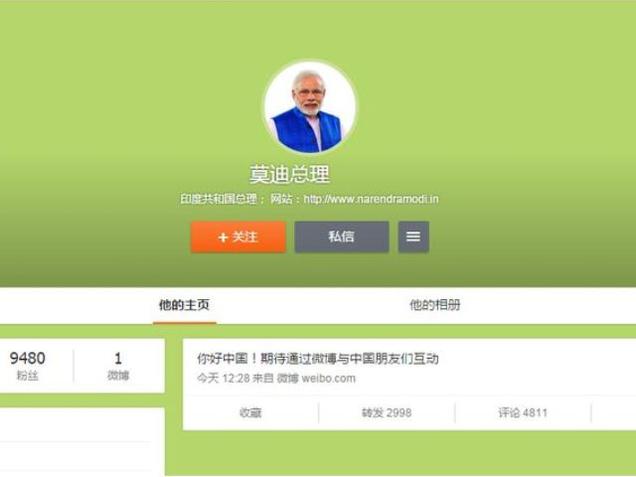 Beijing: After taking on the real world and stamping his impression, it seems Indiaâ€™s Prime Minister Narendra Modi is all set to leave his footprints on the virtual world too.

Within six days of joining Weibo, regarded as China’s Twitter, Modi has picked up 46,000 followers, which is a rare feat for a foreign leader.

PM Modi has also been lauded by China’s official media for his efforts to communicate with the local people over the Chinese Social Media platform.

Chinese media, including the state-run English newspapers, have welcomed Modi’s move and have published reports about Modi’s popularity on the web platform in China.

The reports indicate the government’s approval of Modi’s endeavour to communicate with ordinary Chinese people.

Indo-China relations have mostly been driven by government relations and media reports, and there has been little direct communication between the people of the two countries. This is the first time that an Indian leader is directly talking to Chinese people.

The Weibo communication may have an impact on students of the Tsinghua University in Beijing, whom he will address onÂ May 15Â and those at the prestigious Fudan University in Shanghai, where Modi will inaugurate a center for Indian and Gandhian studies onÂ May 16. He will also meet the Indian community in Shanghai on that day.

His first post said, â€˜Hello China! Looking forward to interacting with Chinese friends through Weibo.” This was forwarded or retweeted 4,700 times within the first hour of hitting the Internet on May 5.

Though Modi has been widely-welcomed by Weibo users, there is a miniscule minority which is raising the issue of Arunachal Pradesh, which is being claimed by China describing it as “South Tibet”. But Indian officials think such posts are so small in number they are not something to be worried about.
Â