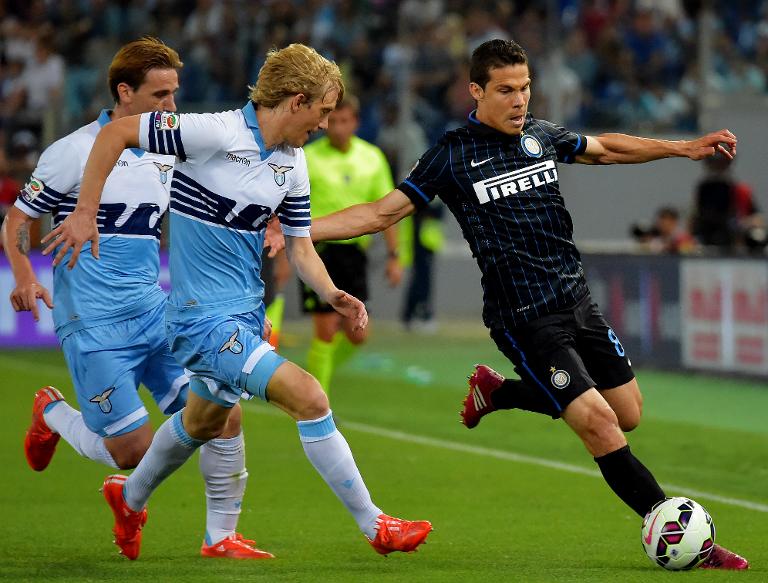 A brace from former Lazio star Hernanes saw Inter Milan beat his old side 2-1 in Serie A in an incident-packed clash on Sunday which saw the hosts have two players sent off and Inter miss a penalty.

Brazilian Hernanes spent three-and-a-half years at Lazio and claimed that he cried when he was sold to Inter last January.

But he enraged the home fans in Rome when he celebrated his 26th-minute equaliser with a somersault only seconds after defender Mauricio had been sent off for pulling back Rodrigo Palacio when he was through on goal.

â€œThis was a very important match for me, I’m a better player than I was at Lazio and I wanted to show it,â€ said Hernanes.

â€œ(Lazio chairman Claudio) Lotito spoke too much, saying that he’d done a great bit of business by selling me. That was for him.â€

To rub salt into the wound the 29-year-old raced on to Palacio’s delightful flick and slotted home the winner seven minutes before the end to move Inter up to 52 points, only three away from the Europa League places.

Stefano Pioli’s side, who took the lead in the eighth minute through a classy Antonio Candreva strike after great work on the left from Felipe Anderson, stay third on 63 points, one behind local rivals Roma after a game that saw them down to 10 men after only 25 minutes.

They were then down to nine on the hour when goalkeeper Federico Marchetti brought down Mauro Icardi just as he was about to put Inter into the lead.

Icardi’s weak penalty was easily saved by substitute keeper Etrit Berisha, sparking hopes of a point, but Hernanes crushed them with his smooth finish.

â€œReaching such an important match for our ambitions, a whole year of work and it is decided by a group of officials who are truly difficult to defend.

â€œThis result and the way it came about could affect the team psychologically for the rest of the season. It’s a whole year of work up in flames.â€

The defeat is a huge let off for second-placed Roma, who fell limply 2-0 at AC Milan on Saturday, and fourth-placed Napoli, who are three points behind Lazio despite only drawing 2-2 at bankrupt and relegated Parma.

There was also controversy there, after a Parma display that was apparently too spirited for some within the Napoli set-up.

Gonzalo Higuain reacted badly at the end of the game, having to be pulled away from Parma goalkeeper Antonio Mirante as he reportedly shouted â€œyou’re already down, what do you want?â€

â€œI was there and I heard what was said after the game,â€ Donadoni told Mediaset.

â€œHaving people tell us we should lose just because weâ€™re bankrupt and already relegated is disgusting and shameful.

â€œIt wasnâ€™t just Higuain, but a few others said the same on the field during the game. When you hear something like that from a director, though, itâ€™s a real tragedy.â€

Napoli’s official Twitter account posted a statement saying that the reaction related to what they thought was Parma’s time-wasting.

â€œNone of the protests had anything to do with Parma’s commitment, which was commendable,â€ the account said.

Fiorentina are on 55 points in fifth after winning a thrilling Tuscan derby at Empoli 3-2 thanks to a classy double from Josip Ilicic and a trademark individual goal from Mohamed Salah.

Sampdoria are a point behind them in sixth place after winning their first match in seven 4-1 at Udinese with a brace from Roberto Soriano and two more from Afriyie Acquah and Alfred Duncan.

Cesena were relegated from the Italian top flight with three games to spare on after throwing away a two-goal half-time lead to lose 3-2 at home to Sassuolo and relegation rivals Atalanta won 3-2 at Palermo.

Luca Toni is only one goal behind the league’s top scorer Carlos Tevez after scoring his 19th goal of the season in an exciting 2-2 derby draw with local rivals Chievo.