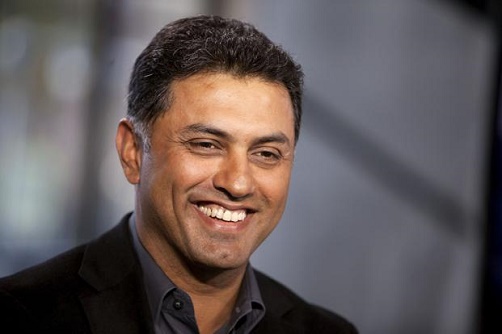 New York: India-born Nikesh Arora was on Monday appointed as president of Japan’s SoftBank Corp and has been named as a potential successor to CEO Masayoshi Son.

Arora, Google’s former Chief Business Officer, had left the company to join SoftBank last year at a time when he was regarded as among the top lieutenants at the internet search giant.

“Nikesh Arora assumed positions of Vice Chairman of SoftBank Corp and CEO of SB Group US, Inc in September 2014, and has been deeply involved in the development and execution of the Group’s growth strategy. In pursuit of enhancement of the management structure along with further global development, the Company has decided to appoint Arora as Representative Director, President of the Company,” the company said in a statement.

A report in Fortune said that Arora’s elevation at SoftBank comes as the telecoms conglomerate steps up its overseas expansion.

During a conference call, billionaire CEO Masayoshi Son, who is relinquishing the president’s post, said Aurora was a “strong candidate” to lead the company in future, according to the Fortune report.

“Yes. He’s 10 years younger than me, and he has more abilities than me,” Son told reporters, when asked if Arora was a potential candidate to succeed him.

“The last nine months I have spent with him have made me sure of that, but I am not going to retire soon,” Son said.

Arora will assume his new role on June 19.

The report in Fortune said the move comes as Son and SoftBank are battling to improve profitability at US carrier Sprint Corp, which they bought in 2013 for more than USD 20 billion.

A sluggish Japanese economy has forced the company to increasingly look overseas for growth, it added.

Arora, a graduate of the Indian Institute of Technology in Varanasi and Northeastern University, was hired to run a newly created unit called SoftBank Internet and Media Inc, reporting directly to Son.

He was among the highest paid executives in 2012, when he made $51 million in cash and stock.

Fortune said SoftBank has been weighed down by the costs of trying to turn around Sprint, which has been in intense competition with larger US rivals AT&T Inc and Verizon Communications Inc as well at T-Mobile.

“We expect more investments and acquisitions, even more so than now,” Son said. “Going forward, the overseas market will be the main factor for SoftBank.