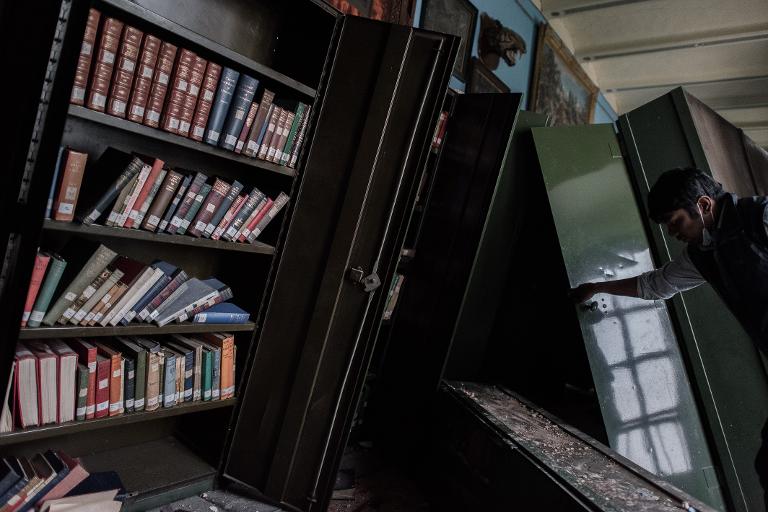 Janaki Karmacharya sits on a plastic chair under the tarpaulin that now serves as her office and despairs at the wreckage of her once magnificent library in the heart of Kathmandu.

Until last month’s earthquake, the Kaiser Library buzzed with Nepali students, intellectuals and tourists attracted by its collection of rare books, maps and ancient manuscripts — all housed in an opulent former palace.

Now wooden bookcases lie smashed on the floor of the 120-year-old building, which was gifted to the nation by the Rana dynasty that ruled Nepal for more than a century before losing power in 1951.

The library was closed on April 25 when the quake struck, and Karmacharya said it was two days before she plucked up the courage to go and see the destruction.

“I was speechless for a while… it was hard to believe the extent of the damage,” the 58-year-old chief librarian told AFP as she surveyed the impact of the 7.8-magnitude quake, which killed more than 7,800 people.

“I cried when I got came back home, I couldn’t help myself. The books are like my children, and I love them very much.

“Thank God it was a Saturday and there were no readers inside.”

Karmacharya estimates that the quake damaged around a third of the 28,000 books in the Kaiser Library.

They were the collection of Kaiser Shumsher, a scion of the Rana family who travelled to England in 1908 and fell in love with the grand houses and their private libraries.

When he returned to Nepal he decided to build his own in his palace in central Kathmandu.

Inside the building, antique statues lie in pieces on the floor and stuffed animal heads and portraits of Nepal’s former rulers in full military dress hang precariously on severely cracked walls.

In one room are the fragments of a suit of armour smashed to pieces in the quake; in another, a stuffed Bengal tiger and a huge bearskin rug, the head and paws still attached.

Books in the English section — many of which Shumsher brought back from his visit to England — include John Buchan’s adventure classics and such titles as “The Big Game of Asia”.

But the library is more than an eccentric throwback to a bygone era in Nepal, a feudal Hindu kingdom until just seven years ago when the monarchy was abolished following a Maoist revolution.

It also houses rare South Asian manuscripts on Buddhism, Tantrism and astrology, some so old they are written on palm-leaves.

They include a 1,100-year-old copy of the Susrutasamhita, an ancient Sanskrit text on medicine, which is listed in UNESCO’s Memory of the World International Register.

“The damage in the Kaiser library is a huge loss to us as it was not only a home for books but an archive of invaluable historic scripts of archaeological importance,” said Labha Dev Awasthi, joint secretary at Nepal’s education ministry.

“We are concerned about the security of the books, paintings and other antique items that were kept in the library.”

Awasthi said the ministry was urgently seeking somewhere safe to store the valuable contents of the building, which is so badly damaged that staff have been advised not to enter.

An official notice pinned to the door states that the structure is unsafe, and many of the old beams and pillars are broken.

“There are lots of cracks and aftershocks happen every day so this building isn’t safe anymore,” said Karmacharya, who now meets with her staff every day under a tarpaulin in the library’s tree-filled garden near the former royal palace.

“It will be a really big challenge for us to manage the library and move the books somewhere else. But we are concerned about the safety of these books.”

The government said the building would also be restored eventually, although it may be resurrected as an art gallery rather than a library.

For freelance journalist and 26-year-old Kathmandu resident Ayush Niroula, who used to read there as a student, that would be a shame.

“There are not a lot of libraries here in Kathmandu and on top of that it’s a really beautiful place to read,” he told AFP.

“They can transfer the books somewhere else, but it has a vibe of its own.”