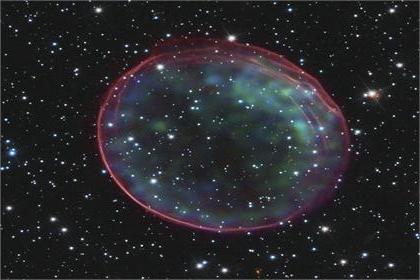 Washington: New observations of a recently exploded star are confirming supercomputer model predictions made at Caltech that the deaths of stellar giants are lopsided affairs in which debris and the stars’ cores hurtle off in opposite directions.

While observing the remnant of supernova (SN) 1987A, NASA’s Nuclear Spectroscopic Telescope Array, or NuSTAR, recently detected the unique energy signature of titanium-44, a radioactive version of titanium that is produced during the early stages of a particular type of star explosion, called a Type II, or core-collapse supernova.

NuSTAR’s principal investigator Fiona Harrison said that Titanium-44 is unstable. When it decays and turns into calcium, it emits gamma rays at a specific energy, which NuSTAR can detect.

By analyzing direction-dependent frequency changes or Doppler shifts of energy from titanium-44, Harrison and her team discovered that most of the material is moving away from NuSTAR. The finding is the best proof yet that the mechanism that triggers Type II supernovae is inherently lopsided.

NuSTAR recently created detailed titanium-44 maps of another supernova remnant, called Cassiopeia A, and there too it found signs of an asymmetrical explosion, although the evidence in this case is not as definitive as with 1987A.

The NuSTAR findings also increase the chances that Advanced LIGO, the upgraded version of the Laser Interferometer Gravitational-wave Observatory, which will begin to take data later this year, will be successful in detecting gravitational waves from supernovae. Gravitational waves are ripples that propagate through the fabric of space-time. According to theory, Type II supernovae should emit gravitational waves, but only if the explosions are asymmetrical.