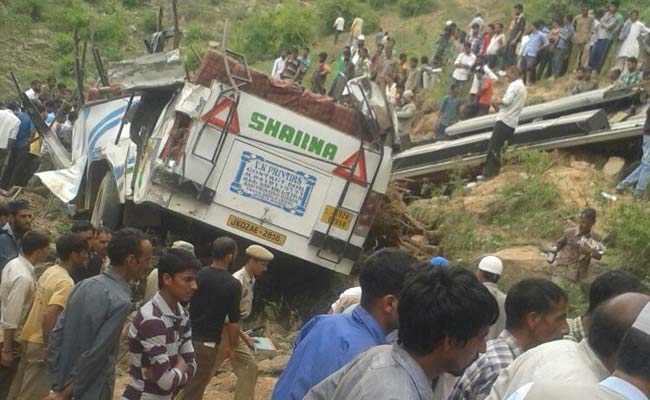 Udhampur:Â Twenty four people died and 49 others were injured, five of them critically, when an overcrowded bus rolled down into a 300 feet deep gorge in Udhampur district of Jammu and Kashmir on Monday.Â

The passenger bus, which was on its way to Udhampur from Dudu-Latti belt, skidded off the road and rolled down into the gorge in Maroti belt in the district, officials said.Â

As many as 24 people have died and 49 others are injured, 5 of them critically, in the mishap, Deputy Commissioner, Udhampur, Yasha Mudgal said.Â

Six persons were airlifted to Government Medical College (GMC) hospital in Jammu for specialised treatment while three critically injured were admitted to Command hospital here. Others have been admitted to Sub-district and other hospitals in Udhampur district.Â

Those killed in the mishap include 10 men, 12 women besides 2 children, the police officer said, adding, driver of the bus identified as Sham Lal (55) was also killed.Â

The bus was overloaded with passengers as over 70 people were on board at the time of the mishap. The accident took place due to mechanical failure of the vehicle, Mudgal said.Â

A probe has been ordered and Assistant Traffic Inspector has been asked submit the report within 24 hours, she said.Â

Mudgal also said that an immediate relief of Rs 10,000 has been provided to families of the deceased and Rs 5,000 to the injured.Â

“It is just an attempt to provide immediate relief out of our Red Cross Fund as this is a major tragedy. This is not an ex-gratia,” she said.Â

Prime Minister Narendra Modi and President Pranab Mukherjee expressed grief over the loss of lives in the accident.Â

In a condolence message, Sayeed conveyed sympathies to the bereaved families and prayed for eternal peace to the departed souls, an official spokesman said.Â

Sayeed directed Divisional Commissioner, Jammu to ensure that best possible medical treatment is extended to the injured, the spokesman said.Â