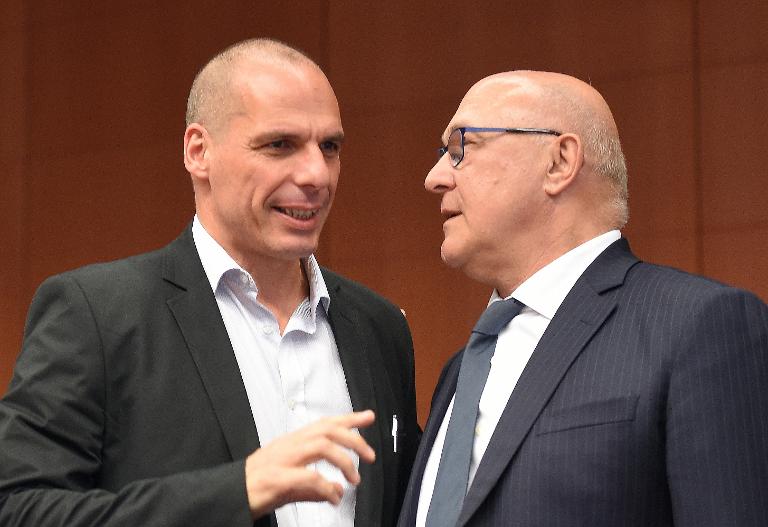 Greece said on Monday it would meet a huge IMF payment deadline to avoid a catastrophic default but despite some progress in talks with its eurozone partners a bailout deal still seemed far out of reach.

Athens said it had ordered the transfer of 750 million euros ($840 million) for a debt payment to the International Monetary Fund which was due to arrive on Tuesday, dispelling fears that Athens would hit a financial wall.

But unswayed by the threat of a possible Greek exit from the euro, European ministers meeting in Brussels held to their hardline after months of fruitless reform talks with Greece’s anti-austerity government.

They ruled out a deal on Monday to unlock the 7.2 billion euros still owed Greece under its 240-billion-euro EU-IMF bailout, which expires at the end of June and will leave Athens without a safety net.

Europe’s stock markets lost ground on Monday as Greece failed to reach a deal while the euro dropped to $1.1141 from $1.1208 late in New York on Friday.

“Unfortunately there is not sufficient progress to reach a decision today,” said Germany’s powerful finance minister Wolfgang Schaeuble as he went into talks with his Greek counterpart Yanis Varoufakis.

Schaeuble also raised the possibility of a Greek referendum, saying that “maybe this would be the right measure to let the Greek people decide if it is ready to accept what is necessary.”

But Greece was hoping for the Eurogroup — the 19 finance ministers from euro area countries — to issue a positive statement about the progress of the talks after the meeting on Monday which could allow some of the remaining bailout money to be paid out.

“There is going to be a communique on the progress we are making and this will be a very good paving stone towards a final conclusion,” said Varoufakis.

He said he expected a final deal “in the next few days, I think.”

But the shaven-headed economics professor — whose outspoken stance has won him few friends among his European counterparts and also annoyed some back in Athens — insisted that the Greek government’s “red lines” stayed the same.

Other officials were gloomier.

“This meeting won’t be conclusive, we all know that,” said the EU’s Economics Affairs Commissioner Pierre Moscovici.

Ireland’s finance minister Michael Noonan said that “people are getting concerned including myself about the liquidity situation in Greece.” Slovakia’s Peter Kazimir said the steps Greece needed to take were “not rocket science.”

Led by Germany, the Europeans still expect a rigorous regime of reforms from Athens including cuts to pensions, but Greek Prime Minister Alexis Tsipras’s leftist government in power since January has so far refused to deliver on the terms of the bailout.

Greece faces a punishing debt repayment schedule in coming weeks, and no one outside the Greek government knows for sure how long it can go, having already raided public funds to meet earlier debts.

Greece has been squeezing funds from the central and local governments to be able to meet its payments, but mayors are beginning to resist.

Greek investors were also gloomy, with the main stock index in Athens closing down 2.51 percent.

Greek officials went on a diplomatic offensive last week to try to get a deal.

Varoufakis made trips to several European capitals while Tsipras spoke three times by phone to Europe’s most powerful leader, Germany’s Angela Merkel, and he repeated calls to Jean-Claude Juncker, the head of the European Commission.