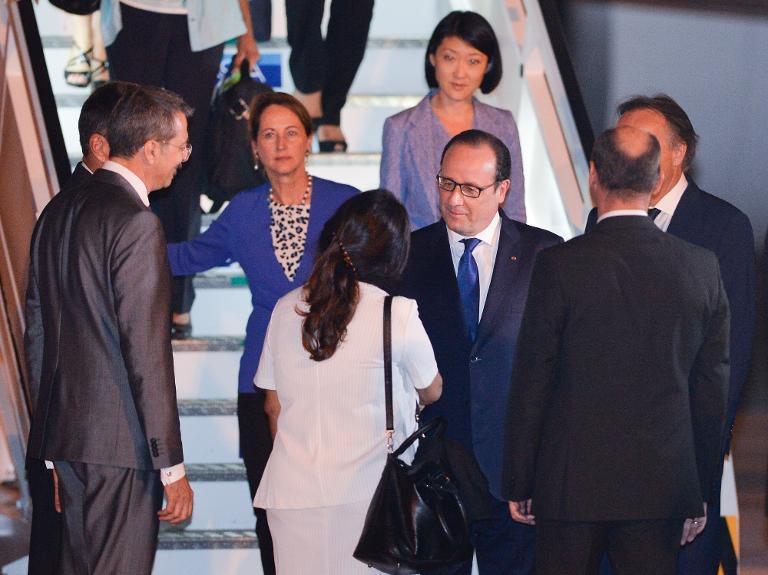 Francois Hollande arrived in Havana Sunday, the first French president to visit Cuba in more than a century, cementing Paris’s lead in the EU rapprochement with the communist island.

Hollande is the first Western leader to visit Cuba since a surprise announcement in December by Havana and Washington that the former Cold War foes would move to normalize relations after half a century of bad blood.

Hollande arrived at Havana’s Jose Marti International Airport at 22:50 (0250 GMT Monday) and was greeted by Cuba’s Deputy Foreign Minister Rogelio Sierra, on the latest leg of a whirlwind five-day tour of the Caribbean.

“I come to Cuba with great emotion because it is the first time that a president of the French Republic has come to Cuba,” he said on arrival.

No French leader has visited Cuba since the island nation gained independence in 1898.

“There are historic ties, deep ties, between the people of France and the people of Cuba,” said Hollande, applauding Cuba’s long-time commitment to independence.

The visit is aimed at boosting French and European Union interests in Cuba, which has undergone gradual economic and social reforms under Castro.

France is seeking to “be the first among European nations, and the first among Western nations, to be able to say to the Cubans that we will be at their side if they decide themselves to take needed steps toward opening up,” Hollande told reporters before arriving in Havana.

The French president said the easing of a decades-long economic embargo by the United States will help Cuba’s cash-strapped economy.

“Cuba wants to move on to a new phase, a new period, a new time for this island that was victim of an embargo,” Hollande said on a stop in Guadeloupe, referring to the US sanctions in place since 1962.

The French leader said removing the embargo was key to opening Cuba up to the rest of the world, adding that despite the move toward thawing relations with Washington, economic barriers remain.

“There are still a lot of measures in place that block trade and business,” Hollande said.

Several agreements will be signed during the trip, though the details of the deals were not made public. Hollande said the accords would focus on improved access to Latin American markets.

Hollande has already made stops in Saint-Barthelemy, Saint-Martin, Martinique, Guadeloupe and will end his regional visit in Haiti on Tuesday.

The French president is due to meet on Monday with his Cuban counterpart Raul Castro, whom he last met with in December 2013 in South Africa at Nelson Mandela’s funeral.

Hollande’s office has said he is available to meet with revolutionary icon Fidel Castro as well, but Havana has not confirmed that face-to-face talks between the two will take place.

The visit follows a meeting Sunday between Raul Castro and Pope Francis at the Vatican, where the Cuban leader thanked the pontiff for his role in brokering the historic detente between Havana and Washington.

In addition to economic issues, the trip is also a chance to discuss human rights issues. Activists have criticized Cuba’s rights record, accusing Havana of cracking down on dissidents and free press.

Hollande did not rule out addressing tough issues during his visit.

“I speak of human rights whenever there are political prisoners, every time there are violations of freedom, France does not remain tight-lipped,” Hollande said before arriving in Havana.

The European Union suspended relations with Cuba in 2003 over a crackdown on journalists and activists, but it opened talks to restore ties in April 2014, aiming to persuade Havana to improve its rights record.

It was under the French presidency of the EU in 2008 that political dialogue was first resumed between Brussels and Havana.

France, which has made its relations with Latin America and the Caribbean a foreign policy priority, has along with the Netherlands been a strong supporter of the normalization of ties between Cuba and the 28-member European bloc.

Europe’s rapprochement with Cuba began before the December announcement on Cuba-US relations.

French Foreign Minister Laurent Fabius made a brief stopover to Cuba in April 2014, the first visit to the island by France’s top diplomat in three decades.

Trade between France and Cuba is modest, worth around $388 million a year, with the balance solidly in France’s favor.

French officials recognize the importance of the EU positioning itself politically and economically for when the US embargo is eventually lifted.