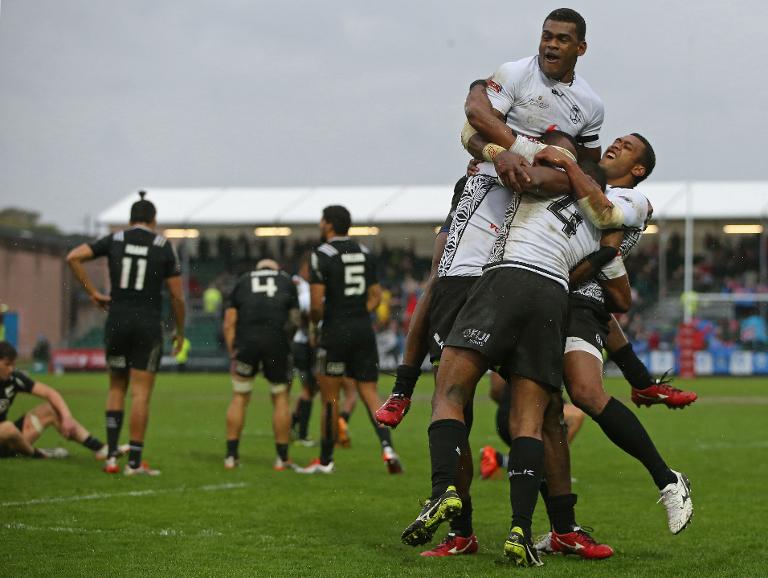 Fiji won the Glasgow Sevens, the penultimate round of this season’s World Sevens Series, by coming from behind to beat New Zealand 24-17 in the final on Sunday.

But there was a silver lining for New Zealand in that their run to the final helped them secure a place at next year’s Olympics in Rio, where sevens will be making its Games debut.

Apisai Domolailai came off the bench to score two second-half tries, with Fiji coming from 12-5 down at the break to win their fourth Sevens title this season.

Victory also saw the Pacific Islanders move ahead of South Africa in the race for Sevens World Series title, having earlier beaten the Blitzboks 15-0 in their quarter final.

The top four teams at the end of this season’s World Rugby Sevens will qualify automatically for next year’s Olympic tournament in Brazil.

Fiji will now head south to London leading the overall standings on 147 points, with South Africa second on 142 and New Zealand third on 139.

England are in the box seat to gain the fourth and final automatic Olympic place as they currently have 117 points compared to Australia’s 101, with the 16-point lead highly unlikely to be overturned in London.

Delighted Fiji coach Ben Ryan said: “This is the most amount of (tournament) wins — four — that we’ve done in one season.

“We have put ourselves in a great position to win our first World Series in 10 years. We have a fit team and we want to win back-to-backs,” the Englishman added.

New Zealand’s long-serving sevens chief Gordon Tietjens, while disappointed by his side’s position in the standings, said there had been a bigger prize at stake.

“The World Series was important but qualification for the Olympics was the goal,” said Tietjens.

“We knew it wasn’t going to be easy to finish in that top four so to know we’re there is really pleasing and you can start seeing yourself going to Rio now.”

Australia lost 14-7 to the United States in the quarter-finals and then went down 21-12 to South Africa in the plate semi-final at a wet Scotstoun Stadium.

If Australia do finish the season in their current position of fifth, the green and golds will play in the regional Oceania Rugby tournament in Auckland on November 14-15, with the winning nation booking its ticket to Rio.

“Going into the game against the USA we were very confident and played well in patches,” said Australia sevens coach Geraint John.

“However, we shot ourselves in the foot against the Americans by turning the ball over too many times and handing them two tries from around 100 metres out which is particularly disappointing,” the Welshman added.

“Throughout the weekend I think we’ve shown glimpses of what we are capable of, but we have been too erratic.”