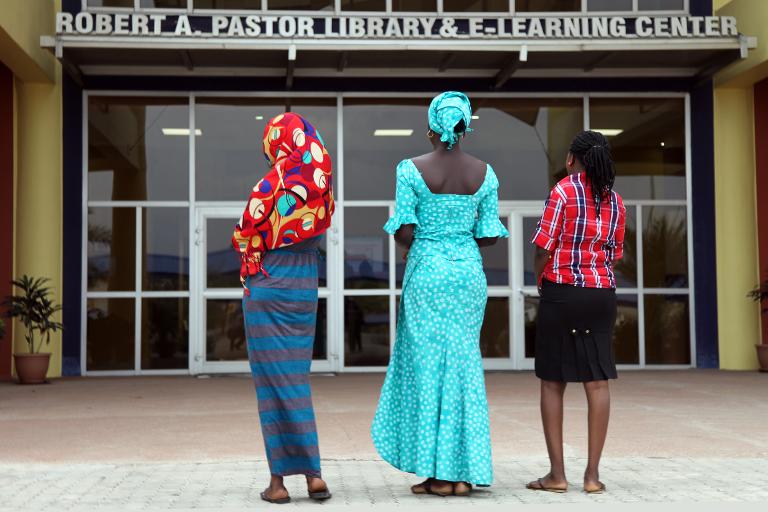 Deborah knows just what to say to the 275 women and children who were held hostage by Boko Haram and rescued recently by the Nigerian military.

“We will pray together, then after praying together I will advise them to forgive the people who mistreated them because if you forgive people God also forgives you,” she said.

The 19-year-old speaks from experience: she was among another group of 276 schoolgirls kidnapped by Boko Haram fighters from her secondary school in the remote northeastern town of Chibok, on April 14 last year.

Deborah and 56 others managed to escape in the hours that followed their abduction. The other 219 were not so lucky and are still missing.

“We will tell them that life is a journey. You meet many obstacles in life and life is just full of surprises and you never think it will happen to you,” she added.

“Now they have been released they should make up their minds to start a new life and live a happy life.

“We have already forgiven them (Boko Haram). It wasn’t difficult because that’s the lesson we’ve been taught since our Sunday School days, that you should forgive whoever hurts you.”

Deborah is sitting in a small, modern classroom at the American University of Nigeria (AUN) in Yola, the capital of Adamawa state, with Blessing and Mary, both 18, who also escaped with her that night.

Twenty-one of the 57 who evaded Boko Haram’s clutches in April 2014 are currently studying at the university, preparing to sit the secondary school examinations that they were unable to take when the Islamists stormed their hometown.

The conversation veers from how they have adapted to life on campus, the undergraduate studies they plan to take and love of watching films and gospel music to learning how to swim and playing basketball.

It’s a far cry from their life back home, they say, where the facilities were rudimentary, electricity supply sketchy and the mobile phone network has been down for the last six months.

At the same time, the trio said they were well aware of the situation facing the 275 hostages recovered from the militants’ Sambisa Forest stronghold, not far from Chibok, in Borno state.

Their release late last month raised hopes that Deborah’s former classmates were among them.

“We were happy that they were released but… it was unfortunate that our sisters were still out there,” she said.

The trio now want to do community service to assist at the camp outside Yola where the former captives are now living.

“We are also in a position to help them because we were once like them,” said Deborah.

She added: “We want to share foodstuffs and then give them a kind of inspirational speech that will touch them because we are now people who are used to encouraging others no matter what they have been going through.

“I think we are in a position to help them with our words.”

The Chibok students at AUN are being offered an unexpected chance of a better future, one that is unlikely to be available to the other former hostages.

For the hundreds of thousands of internally displaced people who fled the violence to Yola, though, life will remain tough: some have already returned home now the military appears to have the upper hand against the militants.

But the humanitarian situation remains acute: villages and towns have been destroyed and farmland devastated, raising the prospect of future food shortages for people who mainly live from subsistence farming.

The three students know they have been given a rare opportunity: Deborah wants to work in environmental health while Blessing and Mary both want to become medical doctors — and return to work in Chibok.

The world attention on the Chibok kidnapping prompted benefactors to come forward to pay for the girls’ education, food and accommodation at AUN.

University director Margee Ensign said she was contacted recently with an offer to pay the fees of all 57 of those who escaped last year.

Deborah, Blessing and Mary have been working to contact and convince the others to come: six have so far said they will when the new term starts in August — providing their parents agree.

The young women are excited by the prospect.

“I’m very glad to hear that because I think this is an opportunity that there’s going to be a better Chibok, because the more we are the stronger we will continue to be and the higher the rate of our ambitions,” said Deborah.