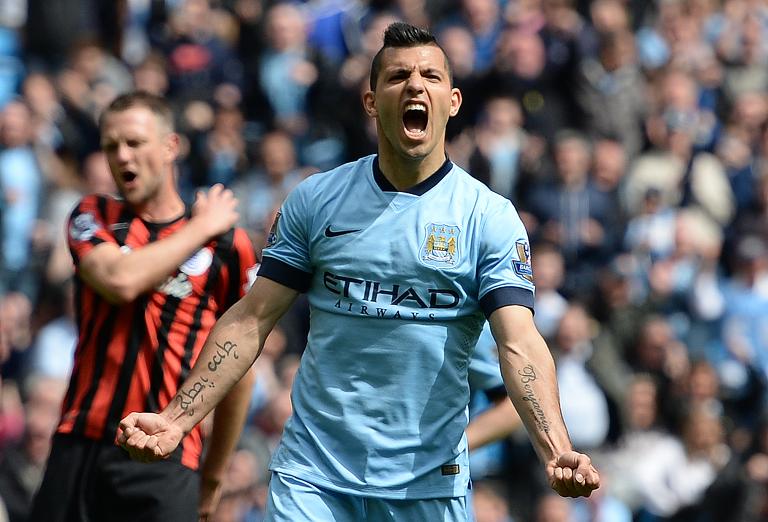 Sergio Aguero scored a hat-trick as Manchester City sealed Queens Park Rangers’ relegation from the Premier League with a 6-0 victory on Sunday.

Meanwhile Liverpool’s hopes of a Champions League place were all but ended despite Steven Gerrard’s goal in a 1-1 draw with English title-winners Chelsea.

QPR’s humiliating defeat left them bottom of the table, nine points adrift of safety and with only a maximum of six available from their final two league games.

By contrast, victory saw deposed champions City stay second behind Chelsea and secure their place in next season’s Champions League.

“We came here with a lot of hope, shot ourselves in the foot and gave away three set-pieces which they scored from,” QPR manager Chris Ramsey told Sky Sports.

“On the day we didn’t really turn up.”

Ramsey, asked if he wanted the QPR job on a permanent basis, said: “Yes. I really do. It’s a club I’ve taken to my heart.”

Aguero’s treble cemented his position as the Premier League’s top scorer this season, the Argentina forward’s tally for the campaign now standing at 25 goals.

“He wants to be the top scorer this season but I think it’s also the way he is playing,” said City manager Manuel Pellegrini.

“He is working a lot more during the game, moving more and receiving more balls.”

Any thoughts of an improbable survival mission for QPR were dashed as early as the fourth minute when Aguero shrugged off some weak tackles before beating QPR goalkeeper Robert Green.

Aleksandar Kolarov doubled the hosts’ lead at Eastlands with a free-kick from the edge of the box in the 32nd minute.

City saw Aguero make it 3-0 in the 50th minute before he completed his hat-trick from the penalty spot 15 minutes later after David Silva was brought down.

And there was still time for James Milner and Silva to make it 6-0.

QPR will now return to the Championship following their promotion via the play-offs last season.

They will be joined in the second tier by Burnley, whose relegation was confirmed on Saturday.

The third and final relegation place is currently occupied by Hull City but several other clubs are also in danger of being demoted.

At the other end of the table, Chelsea faced Liverpool in what was Gerrard’s final match at Stamford Bridge before he joins the LA Galaxy after the end of this season.

Chelsea captain John Terry headed in from a corner to put the Blues 1-0 up in just the fifth minute.

However, opposing skipper Gerrard got Liverpool back on level terms in similar fashion when the midfielder headed in a free-kick at the far post a minute before half-time.

Gerrard was substituted by Liverpool manager Brendan Rodgers shortly before full-time and received a standing ovation from right around Stamford Bridge.

“Chelsea fans have shown me respect for a couple of seconds but slaughtered me all day,” said Gerrard.

“What’s important is the support from the Liverpool fans, they’ve been with me from day one,” he added.

Chelsea manager Jose Mourinho, who tried to sign Gerrard when he was in charge of several different clubs, said of the ovation: “I’m so happy with that.

“The negative song Chelsea fans sing for him is respect for an old, dear enemy that fought so much against us in every competition.

“After that, the standing applause is amazing. To get it at Anfield he gets it week in week out, year after year but away from home it shows a lot.”

This result left Liverpool six points behind Manchester United, who currently occupy the fourth and final Champions League qualifying place, with six more points available to both sides in their final two matches of the season.

It would take a freak combination of results for Liverpool to finish fourth given United’s goal difference currently stands at +25 and the Merseysiders’ at +11.

Sunday’s result in west London also guaranteed Arsenal, currently third ahead of their match at home to Swansea on Monday, a Champions League place.