With Matisse and Van Gogh Tehran gets a makeover | Newsmobile
Sunday, June 26, 2022

Home World With Matisse and Van Gogh Tehran gets a makeover 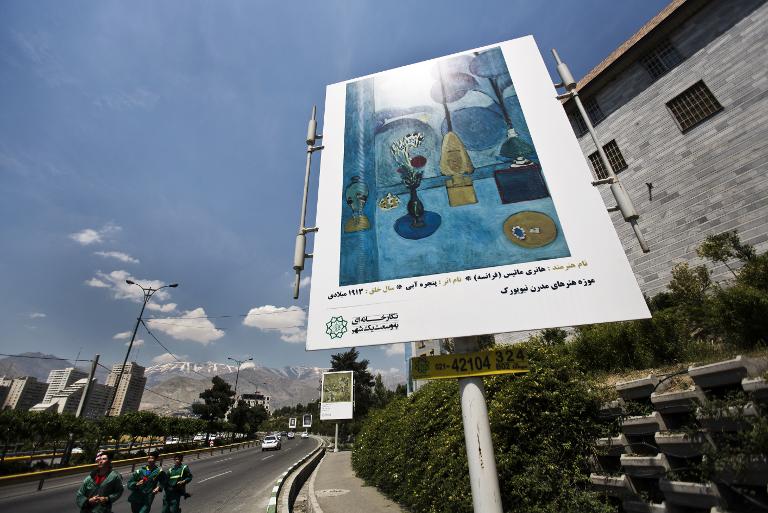 Drivers and millions of commuters used to spending hours in Tehran traffic jams have at least had something nicer to look at during journeys this week: famous works of art.

Advertising hoardings that normally feature the latest smartphones, home appliances or banks and insurance plans have made way — until May 16 — for masterpieces by famous artists in a giant urban beautification scheme.

Vincent Van Gogh’s Sunflowers, Edvard Munch’s The Scream and The Blue Window by Henry Matisse are among the reproductions lining streets and highways, aiming to get citizens more interested in art and to encourage gallery visits.

The project — A Gallery as Big as a Town — took the city by surprise on Wednesday morning.

“It’s great to see these paintings instead of commercials for this or that brand,” said Leyla Mohammadi, a 24-year-old student in the capital.

Some 1,600 billboards featuring 200 Western and Asian works and 500 Iranian ones now sit near murals of supreme leader Ayatollah Ali Khamenei, his predecessor, the Islamic republic’s founder Ruhollah Khomeini, and countless martyrs of the Iran-Iraq war.

The art, all of which would have required approval by the culture ministry — nudes are banned in Iran and other works risk being deemed un-Islamic — may be considered a distraction as well as a welcome sight in a city where fatal road accidents and bad driving are common.

For example, The Son of Man, the apple in the face of a man in tie and bowler hat work by Belgian surrealist artist Rene Magritte, stares out at drivers from an overpass.

But the sprawling scheme represents an evolution, albeit temporary, in the city’s appearance: after the Islamic revolution in 1979 advertising was banned on the grounds that it encouraged materialism and consumerism.

Street and television adverts, however, started popping up in the 1990s and then proliferated, now accompanied by the occasional public health promotion.

The art also offers a softer side to an architecturally bland cityscape where concrete housing blocks and revolutionary slogans such as “Death to America” and “We will always resist” are common.

The art has been a long time coming, Hamid Rezaie, a public relations officer for the Organisation for Tehran’s Beautification, told AFP, noting that an Iranian sculptor, Said Shalapour, came up with the idea a decade ago.

It became a solid possibility last year and a frantic push in the past month brought the plan together. Rezaie said it has already been judged a success and will be repeated.

The exhibition is being funded by advertisers under a clause in their contracts with the municipality that sets aside for cultural promotions or events 10-15 percent of the fees paid for the billboards.

“Without a doubt, contemplating works of art in a quiet and silent space has more effect, but how many people can go to galleries and museums?” asked Jamal Kamyab, head of the beautification organisation.

“We wanted to remind people about art.”

“What they have done is incredible… it’s an exemplary cultural act,” Lili Golestan, one of Tehran’s oldest gallery owners, told Shargh, a moderate newspaper.

It also makes a refreshing change for at least some of the thousands who earn their living driving across the congested capital, one of the world’s biggest and most polluted cities with a population of more than 12 million.

“My customers are very happy about it… at how good the work of the foreign and Iranian artists is,” said Mohsen Mosleni, a 60-year-old taxi driver.

But the scheme has also bred speculation among Iranians that it has political aims.

Tehran’s conservative mayor Mohammad Bagher Ghalibaf is a former Revolutionary Guards Air Force commander who lost out as a presidential candidate in 2005 and 2013.

Critics say Ghalibaf could use a public relations boost, given that the public judged him less palatable than Hassan Rouhani in June 2013.

But the municipality has denied any political motive, insisting the art is just the latest scheme from the mayor — following the opening of vast parks and sports complexes — to improve the lives of Tehranis.