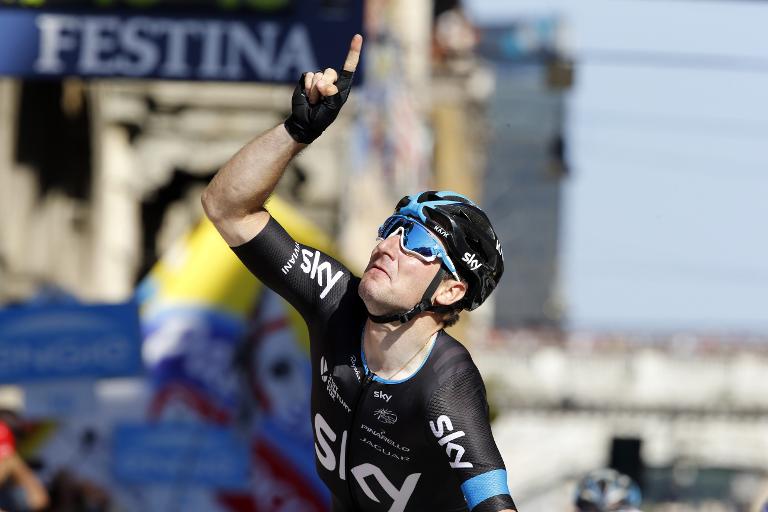 Italy’s Elia Viviani won a sprint finish for the second stage of the Giro d’Italia on Sunday to put his Sky team back in the running after a disappointing opening day.

Viviani crossed ahead of Dutch cyclist Moreno Hofland and Germany’s Andre Greipel after 4hr 13min 18sec in the saddle over 177km from Albenga to Genoa.

It was the seventh time the 24-year-old from Canberra had pulled on the pink jersey, after also grabbing it on the second stage last year, before holding it for six days.

In Genoa the Australian crossed the line in ninth with Gerrans, in 19th.

“The important thing was to keep it (jersey) in the team,” said Matthews, who was unable to challenge on the 900m run to the line.

The win proved a boost for the British Sky team who finished just ninth in the opening day’s team time-trial leaving their ambitious team leader Richie Porte of Australia trailing at 27sec.

It was the first stage win in a major Tour for 26-year-old Viviani, a two-time world track championship medallist last February.

Greipel, who had held an early lead, lost steam in the final 100m to be overtaken by Hofland. But the young Dutch rider was soon chased down by Viviani.

“I worked hard at the Tour de Romandie and I arrived in top condition at the Giro,” said Viviani, who also won a stage in the Tour of Dubai in February ahead of Britain’s Mark Cavendish.

Five riders — Marco Frapporti, Lukasz Owsian, Giacomo Berlato, Eugert Zhupa and Bert-Jan Lindeman — lead a long breakaway building a lead of nine minutes before being caught 11km from the line in the outskirts of Genoa.

The stage was also peppered with falls, notably Australian champion Heinrich Haussler and Italy’s Matteo Pelucchi who crashed in the final stretch.

An accident also cost AG2R climber Domenico Pozzovivo previous time as he lost 1min 09sec after picking up a minor leg injury 11km from the line.

“The loss of time is nothing compared to the damage you can do,” said Pozzovivo, who finished fifth in last year’s giro.

Monday’s third stage is a 136km run through the Ligurian countryside between Rapallo and Sestri Levante.