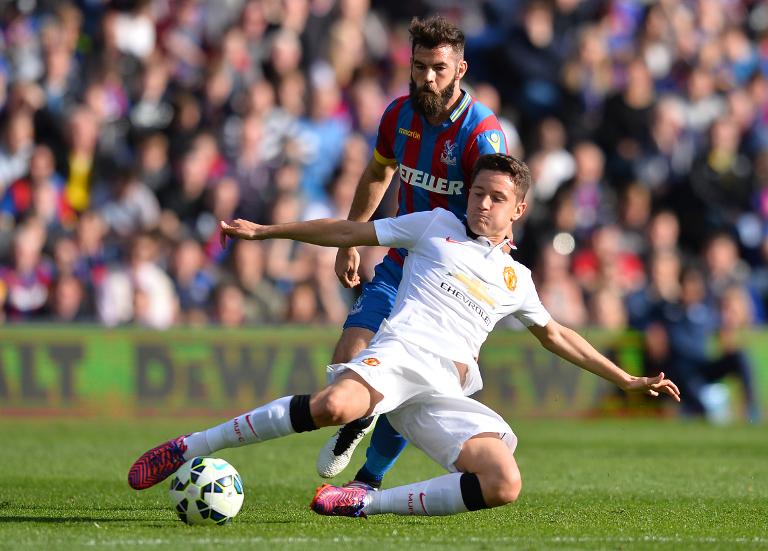 Manchester United moved to the brink of Champions League qualification with a 2-1 win at Crystal Palace on Saturday, while Burnley’s relegation from the Premier League was confirmed.

Juan Mata put United ahead with a 19th-minute penalty after Scott Dann was adjudged to have handled the ball, before Luke Shaw, who took a blow to the face, and Wayne Rooney, who appeared to hurt his thigh, were forced off.

Jason Puncheon equalised with a 57th-minute free-kick that nicked off Daley Blind, but 12 minutes from time Palace goalkeeper Julian Speroni got caught beneath Ashley Young’s left-wing cross and Marouane Fellaini headed in the winner.

“It was very important to win this match and it is a right step to qualification for the Champions League,” United manager Louis van Gaal told Sky Sports.

“We had injuries, we had to change and the team was out of balance with Phil Jones at left-back and Wayne Rooney, our attacking point, going off. We have showed what you can achieve as a team and we have achieved our victory.”

The victory took United seven points clear of fifth-place Liverpool, who will be unable to overhaul Van Gaal’s side if they lose at freshly crowned champions Chelsea on Sunday.

Even if Liverpool do prevail at Stamford Bridge, United will need only three points from their final two games at home to Arsenal and away at Hull City to rubber-stamp a top-four finish.

While United ended a run of three straight defeats, they were once again indebted to goalkeeper David de Gea, who produced a pair of stunning point-blank saves to thwart Glenn Murray either side of Fellaini’s winner.

Burnley were relegated despite winning 1-0 at fellow strugglers Hull, which left them seven points from safety with only two games remaining.

Promoted from the Championship last season, Burnley gave themselves hope of avoiding the drop by stunning defending champions Manchester City 1-0 in March, but they subsequently went six games without winning, losing five.

Danny Ings stopped the rot with a 62nd-minute winner at the KC Stadium, crashing home left-footed after Hull failed to clear a corner to end a 1,036-minute goal drought for Sean Dyche’s side, but it was to no avail.

“We did what we had to do today, but we have not done it enough over the course of the season,” said Burnley manager Dyche. “Of course relegation is disappointing, but I believe we’re in decent shape to bounce straight back.”

The result dragged Hull into the relegation zone and left Steve Bruce’s side two points from safety ahead of their thorny final fixtures away to Tottenham Hotspur and at home to United.

Burnley went down despite moving above Queens Park Rangers, who are on the brink of slipping into the second tier as they are nine points adrift of safety ahead of their trip to Manchester City on Sunday.

Newcastle United skidded closer to the relegation zone despite halting an eight-game losing streak — the club’s worst sequence since 1977 — by drawing 1-1 at home to West Bromwich Albion.

Victor Anichebe headed West Brom in front in the 32nd minute, but Newcastle striker Ayoze Perez equalised nine minutes later by gathering a free-kick from Ryan Taylor and finding the bottom-right corner with his left foot.

“The proof was in the pudding today,” said Newcastle manager John Carver. “I saw the fight and the desire to keep this team in the Premier League.”

Newcastle are now one place and two points above the bottom three, level on points with local rivals Sunderland, who won 2-0 at Everton courtesy of scrappy second-half efforts from Danny Graham and Jermain Defoe.

Leicester City’s stunning resurgence continued as they made it six wins from seven games with a 2-0 victory at home to Southampton that left Nigel Pearson’s side three points above the drop zone.

Algerian winger Riyad Mahrez scored both goals in the first 19 minutes, first drilling left-footed into the bottom-right corner from the edge of the box and then daintily converting a left-wing cross from Jamie Vardy.

Tottenham remain a point above Southampton in sixth place despite crashing 3-0 at Stoke City.

Charlie Adam, Steven Nzonzi and Mame Biram Diouf scored for Stoke, while Spurs had defender Vlad Chiriches sent off early in the second period after he received a second yellow card.