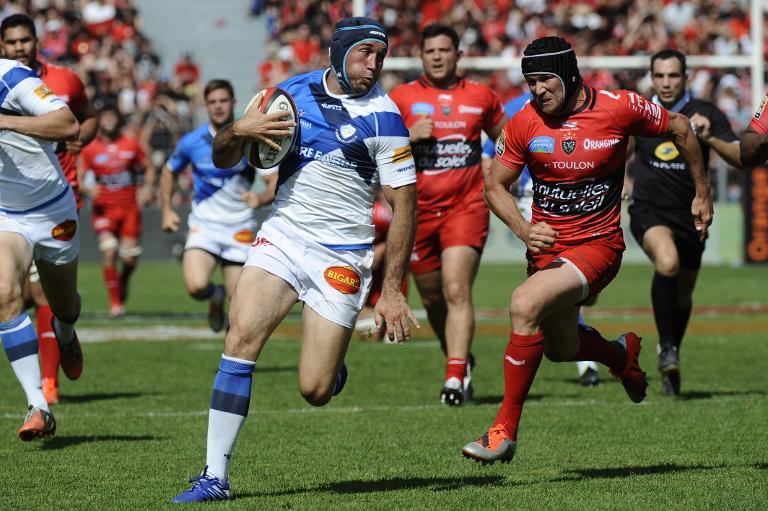 Toulon showed no signs of a hangover after their unprecedented third consecutive European title with a five-try 37-21 demolition of struggling Castres in the Top 14 on Saturday.

Leigh Halfpenny scored a try, three conversions and two penalties for a personal haul of 17 points as Toulon turned their attention to the defence of their Top 14 title just a week after seeing off Clermont in the European Champions Cup final.

Clermont shrugged off their European misery with a 37-17 win at Grenoble which kept them in second spot while Toulouse, the 17-time champions, kept up their push for a semi-final place with a nine-try 67-19 rout of Brive to go third.

Bordeaux kept their play-off hopes alive with a 26-23 win over Oyonnax.

At the other end, rock-bottom Lyon drew 16-16 with La Rochelle but are almost certainly doomed to relegation.

A star-studded Toulon proved too strong for a Castres locked in a relegation battle but who denied the home side an offensive bonus point by scoring three tries of their own.

“Above all, we take the four points for the win, even if it’s true that we made two or three mistakes which meant we didn’t take the bonus point we should have taken,” said Toulon coach Bernard Laporte.

“But I saw a lot of concentration and willingness from the players right from the kick-off.”

Laporte added: “We’ll now rotate much of the squad for Clermont (next week).”

It took Toulon 11 minutes to get their first score.

A bullocking run by ex-All Black Chris Masoe against his old club split the defence, the ball was spun left and English flanker Steffon Armitage was on hand to scramble over the line for a try.

Castres then scored a neat try through Romain Martial, the winger latching on to a neat Julien Dumora grubber to touch down in the corner.

Xavier Chiocci was the welcome recipient of an Ali Williams palm-down from the re-start, the prop tearing through four attempted tackles from 30 metres out for a memorable try, Halfpenny mishitting the extras.

A second penalty from the Welsh full-back heralded a fine set-piece move that saw Australian playmaker Matt Giteau find Halfpenny with a scything pass, his acceleration and deft offload setting Fijian winger Josua Tuisova steaming over for a great try.

Tuisova got his second just three minutes into the second period, enjoying a straight run at the line after a precise Armitage pass.

With 15 minutes to play, Halfpenny touched down after the defence failed to ground a Drew Mitchell grubber, the Welshman converting his own effort.

With the game in the bag, Toulon let Castres in for two well-taken consolation scores from South African-born France international scrum-half Rory Kockott and captain Romain Cabannes which lost them the bonus point.

Clermont are three points behind Toulon after a bonus point 37-17 win at Grenoble, a fourth away victory of the season for Franck Azema’s men.

It also ended a run of three successive losses for the European Cup runners-up at Grenoble’s Stade des Alpes home.

Toulouse became the first team in France this season to win five games in succession with their brutal 67-19 win over Brive who are also battling the drop.

In the tight battle to finish in the top six and ensure a play-off spot, seventh-placed Bordeaux edged Oyonnax 26-23 but the visitors stayed sixth after grabbing a losing bonus point courtesy of an 80th-minute try from Florian Denos.

Sunday sees the Parisian derby between Racing-Metro and Stade Francais.