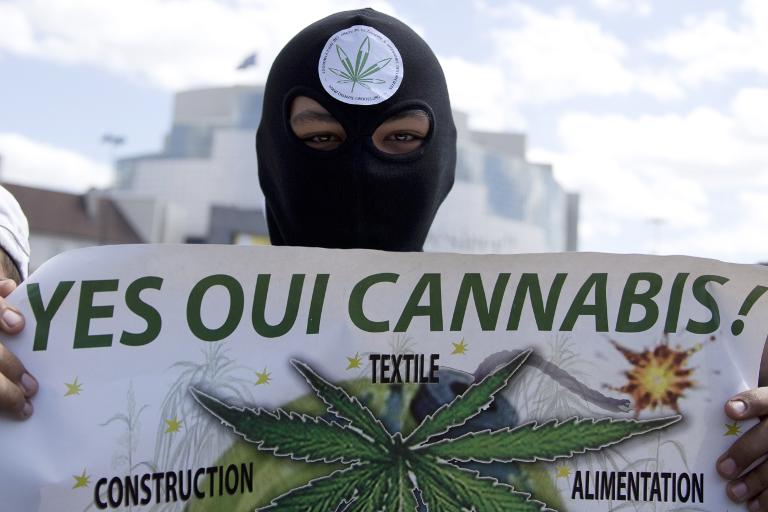 Sporting T-shirts and caps printed with marijuana leaves and with joints hanging from their lips, hundreds of people demonstrated in Paris on Saturday as part of a world march calling for the legalisation of cannabis.

Crowds of protesters, many dressed in Jamaican colours, made their way through the streets of the French capital from the Place de la Republique to Bastille calling for the legalisation of recreational marijuana use.

“What do we want? Legalisation,” chanted the crowd, wreathed in clouds of hashish smoke and gathered behind a banner reading “Another drug policy is possible” and placards calling for “Ganga for all”.

Some, like 16-year-old Julien, came because they wanted to “smoke in peace”.

But for others, the Global Marijuana March — which also held events in Brazil, Greece, Costa Rica, the US, Germany and South Africa among others this month — was about calling for a better life for the terminally ill.

Beatrice, 52, has AIDS and a disorder of the nervous system that confined her to a wheelchair 20 years ago. “But since I started smoking marijuana, I have felt better,” she said. “I am walking again, it helps my therapy and it helps me to eat.”

For 15 years she has consumed between 0.8 and one gram of cannabis per day and, encouraged by her doctor, she now grows it in her garden. “I try to be discreet,” she said.

“It’s proven that consumption tumbles, violence tumbles, if it is legalised,” she said, adding that thousands of jobs would be created if the “oppressive” laws prohibiting cannabis were scrapped.

Cannabis use has been illegal in France since 1970, punishable by one year in prison and a 3,750-euro ($4,200) fine. In practice, imprisonment is rare, although fines continue to be meted out.

For Alain, a supporter of recreational marijuana use in his 50s, the “demonisation” of cannabis has been supported by the pharmaceutical industry as “cannabis could be an affordable antidepressant”.

According to Senator Esther Benbassa, who was behind a bill proposing the state-controlled sale and use of cannabis that was shot down in April, most objections boil down to morality.

“There is still the idea that the cannabis smoker is on the wrong track. He smokes every day, it’s an addiction,” she said, calling for fresh legislation on what she sees as a “public health problem”.

A young transvestite member of militant LGBT group the Sisters of Perpetual Indulgence who was wearing a coloured religious outfit said smoking marijuana can be a “vital” lifeline for severely ill people.

Rejecting the cliche that only “old hippies” smoke weed, he said cannabis “is the only thing that allows some epileptic children to live”.

“You don’t make them smoke joints, but give it to them in milk, biscuits or in capsules. That way they can go to school, they don’t become vegetables like with other medications.”