Home Face Off The German Racer 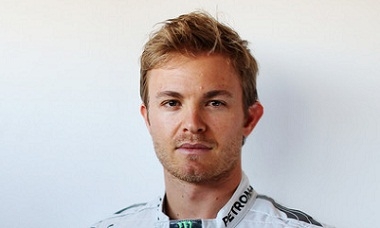 Offered an aeronautical engineering course at the prestigious Imperial College, London, he declined it to pursue his first love, racing.

With the ability to develop a car into a winning machine, he is one of the most talented drivers on the circuit.

He has won 8 Grand Prix and earned 14 pole positions.

Nico Erik RosbergÂ was born on June 27, 1985 in Hesse, Germany. Â Son of a Formula 1 world champion, he was born only four days after his father won theÂ 1985 Detroit Grand Prix.

Rosberg spent much of his youth inÂ MonacoÂ with his family.Â

At the age of 10, Rosberg started out inÂ karting. His good performances resulted in a move to drive for his father’s team inÂ Formula 3 Euro Series. At 17 he became the youngest person to drive an F1 car when he was given a test with Williams.

He spent two years driving for the team bearing his fatherâ€™s name in Formula 3 Euro series. In 2005, he moved into the GP2 series with ART racing, winning the championship in his rookie year.

Rosberg was officially confirmed as aÂ â€˜Williamsâ€™Â driver for theÂ 2006 season. He got off to a flying start with his debut at 2006 Bahrain Grand Prix where he finished seventh and became the youngest driver ever to record a fastest lap. However, he ended his rookie year ranked seventeenth.

In 2007, he improved on his debut seasonÂ finishing ninth in the driverâ€™s standing. He secured the first podium finish of his career with a strong drive to third place at theÂ 2008 Australian Grand Prix.Â

Rosberg enjoyed a solid season in 2009, scoring points at almost every race and also consistently qualifying in the top ten.Â

Mercedes snapped him up as a driver for 2010, where he led them to three podium finishes over the course of the season. However, he was hit by bad luck inÂ Japan when a wheel detached itself from his car and put Rosberg into the wall.

At the inauguralÂ Korean Grand PrixÂ he was even more unfortunate as he retired from the race after colliding with Mark Webber.

He did not have a good run in 2011 and ended up without a podium finish. The next two years were different story altogether as he won the Chinese Grand Prix and got three consecutive pole positions in Monaco.

Rosberg was booed at the podium by Hamilton fans.

Rosberg married his childhood friend and long-time fiancÃ©e Vivian Sibold in July 2014.He speaks fluent German, English, Italian and French, but does not speak Finnish.

He holds dual citizenship, German and Finnish and has competed under both the Finnish and German flag during different points in his early career.