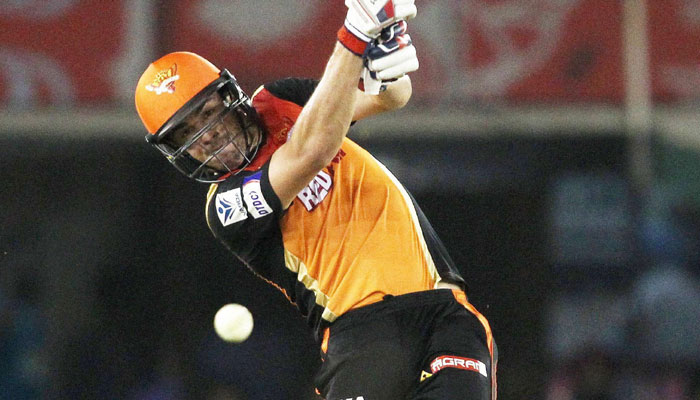 Raipur: Moises Henriques’ gritty fifty and Bhuvaneshwar Kumar’s crafty bowling helped SunRisers Hyderabad stay in the hunt for the playoffs as they beat Delhi Daredevils by 6 runs in a hard-fought IPL cricket match, here on Saturday.

SRH jumped to the fourth spot with their sixth win in 11 games, while seventh-placed DD suffered their eight loss in 12 matches to end their hopes of a final-four spot.

Electing to bat at the Shaheed Veer Narayan International Stadium – DD’s second home, SRH rode on an unbeaten 74 from man-of-the-match Henriques to post 163 for four in 20 overs.

The David Warner-led side then defended its target after restricting DD to 157 for four as Kedar Jadhav (63 not out) and Saurabh Tiwary (26 not out) stood disappointed with a 91-run unbeaten stand.

Bhuvneshwar (1-20) struck early as the medium-pacer got Shreyas Iyer caught and bowled for a naught in the third over of the innings.

Wicketkeeper-batsman Quinton de Kock (50) then stitched a 47-run partnership with skipper Jean-Paul Duminy (12) to give the side some stability.

But in came leg-spinner Karn Sharma (2-12), the sixth bowler in nine overs, and got dangerman De Kock stumped on a delivery that tossed and turned to draw the South African out of his crease.

Off-spinner Parvez Rasool (1-20) got Yuvraj Singh (2) caught at long on in the very next over and Karn was the catcher.

The Meerut-born Karn continued to make his presence felt as he cleaned up Duminy in his very next over as DD kept losing control.

Jadhav, his 34-ball knock laced with 8 fours and 2 sixes, and Tiwary again raised hopes of a successful chase with a good-looking fifth wicket stand but just ran out of steam in the end.

Needing 22 of the final two overs, Bhuvneshwar bowled a near-perfect penultimate over to give away just 6 runs. Ishant Sharma then did the job as he never allowed DD to get 16 runs off the final 6 deliveries even after the over started with a boundary.

Earlier in the SRH innings Henriques managed to stick around with a wobbly top-order to finally stitch a crucial 64-run unbeaten fifth wicket stand with Ravi Bopara (17 not out) and take the team to a respectable total.

Nathan Coulter-Nile (2-25) struck in the very next over to send David Warner (17) back in the dug out, just when the skipper was looking dangerous.

Henriques and Eoin Morgan (22) then stitched a quiet 33-run partnership before Jayant Yadav (1-19), who opened the attack for DD, broke through in the 11th over.

Morgan tried to loft out a pitched up Yadav delivery to long-off but Coulter-Nile took a good catch as he got his hands under the dipping white ball.

Coulter-Nile continued to make his presence on the field as he broke through another partnership after getting Karn Sharma (16) back in the pavilion. It was now the turn of Yadav to return the favour as he picked a neat catch after Sharma mistimed a short ball to the point region.

After that it an Henriques show, who helped the side get 21 runs of the penultimate over post hitting Albie (0-35) for two big sixes.

The final over, bowled by Zaheer, also saw a six from Henriques as SRH managed 64 runs from the final 5 overs.