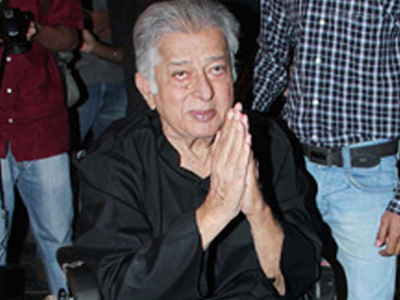 The big fat Kapoor Khandaan has found a new reason to put on its party hats. Veteran actor-filmmaker Shashi Kapoor has been honoured with the Â Dadasaheb Phalke Award.

The 77-year-old, ridden on a wheelchair, was escorted to the stage where he received the third Dadasaheb Phalke award for the Kapoor family.

Present on the occasion were all of his family members, along with megastar Amitabh Bachchan and Abhishek Bachchan.

Due to Shashi’s ill health, he could not travel to the capital for the award ceremony on May 3. So, minister Jaitley flew to confer the award on him.

A special audio-visual celebrating Shashi’s film and personal journey was also screened at the event. It featured Amitabh, Shabana Azmi, Sharmila Tagore, Rishi Kapoor, Randhir Kapoor talking about the cinematic icon, who also had an equal penchant for theatre.

Best known for his nuanced performance in memorable films like “Satyam Shivam Sundaram”, “Trishul”, “Kabhi Kabhie”, “Vijeta” and “Kalyug”, Shashi Kapoor has been staying away from the limelight since the late 1990s.