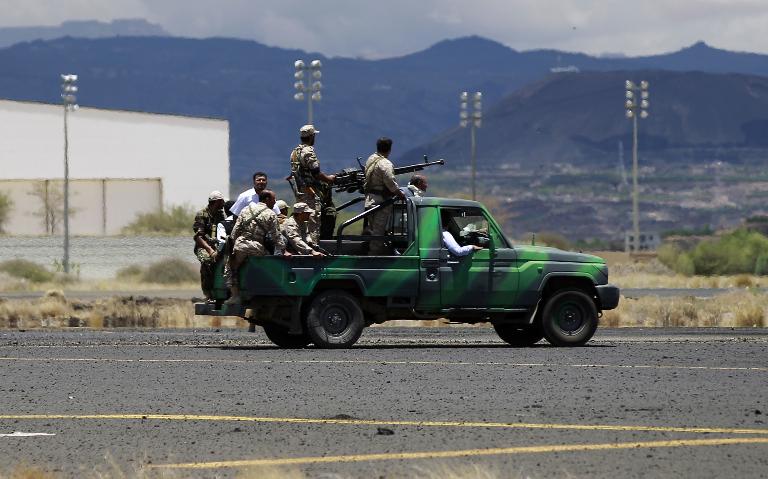 The Saudi-led coalition bombed the Yemeni capital’s airport and the Shiite rebels’ northern stronghold on Saturday just hours after proposing a humanitarian ceasefire to start next week.

Hundreds of families fled the rebels’ Saada province bastion before a coalition deadline to leave expired on Friday evening, after which warplanes pounded the bases and homes of rebel leaders, witnesses said.

Aid agencies warned that many civilians would not have had time to leave Saada by the deadline, and urged the coalition to hold back from its threat to treat the whole province as a military target.

After six weeks of air strikes in support of exiled President Abedrabbo Mansour Hadi, the coalition zeroed in on Saada, the rugged heartland of the Huthi Shiite rebels on the border with Saudi Arabia.

Riyadh has warned that the Iran-backed rebels crossed a “red line” by shelling populated border areas of the kingdom earlier this week.

The insurgents’ Al-Masirah television channel said Marran and nearby Baqim were hit by more than 160 rockets.

It said the coalition had launched more than 27 air raids across the province.

Residents of Saada city said strikes brought down the telecommunications network there.

The coalition confirmed on Saturday it had targeted the houses of several Huthi chiefs as well as arms depots, and renewed its call to civilians to avoid rebel positions, the Saudi SPA state news agency said.

Coalition warplanes also launched new strikes against the airport in the rebel-held capital Sanaa, where the runway was damaged in previous raids.

The coalition has imposed a tight sea and air blockade in an attempt to prevent supplies from reaching the rebels and their allies in the security forces.

The rebels have yet to respond to the proposal made by Saudi Foreign Minister Adel al-Jubeir on Friday for a five-day ceasefire beginning on Tuesday.

“The ceasefire will end should Huthis or their allies not live up to the agreement — this is a chance for the Huthis to show that they care about their people and they care about the Yemen people,” Jubeir said at a joint news conference in Paris with US Secretary of State John Kerry.

Kerry said the ceasefire would take place “provided that the Huthis agree that there will be no bombing, no shooting, no movement of their troops or manoeuvring to reposition for military advantage (and) no movement of heavy weapons”.

He stressed that the pause in hostilities was a “renewable commitment” that, if it held, “opens the door to possibility of an extension”.

The United Nations has called repeatedly for a ceasefire after weeks of fighting that have killed more than 1,400 people, many of them civilians.

Even before the latest exodus of civilians from Saada, the UN estimated that the conflict had displaced at least 300,000 people.

Doctors without Borders (MSF) warned it was “impossible” for Saada’s entire population to leave in just hours, and called on Twitter for the coalition to avoid hitting residential areas.

In Yemen’s main southern city Aden, there was no letup in weeks of fighting between the rebels and their allies and forces loyal to Hadi.

And in Zinjibar, the provincial capital of Abyan, 30 people were killed — 24 rebels and six pro-Hadi fighters — in clashes that broke out on Friday, a military official said.

Al-Qaeda, which already had a firm foothold in parts of the south and east, has taken advantage of the conflict to expand its grip, seizing a provincial capital, an airport and a series of military bases.

Washington has waged a longstanding drone war against Al-Qaeda’s Yemen branch, which it regards as the most dangerous, but was forced to withdraw its forward operators from a southern air base as the rebels advanced on Aden.