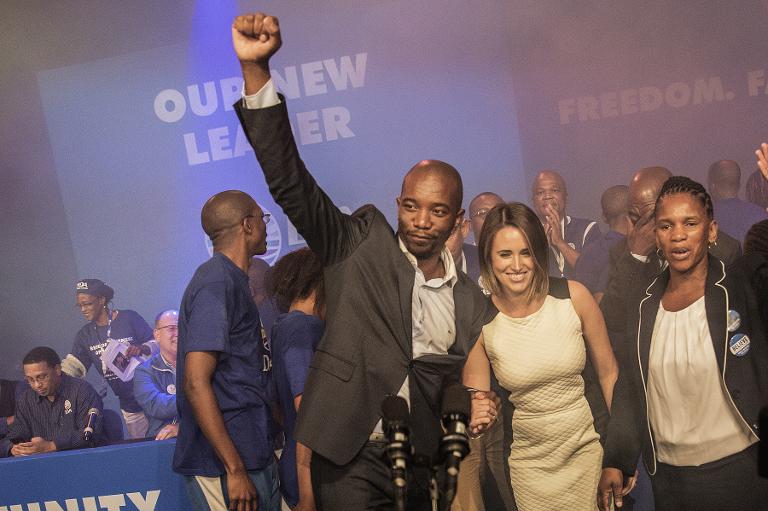 South Africa’s main opposition party, the Democratic Alliance, on Sunday elected its first black leader, a major step in its bid to present itself as an alternative to the ruling African National Congress (ANC).

The DA, which has been widely seen as a party of middle-class whites, won 22 percent of the ballot in last year’s general election and is looking to broaden its appeal among black voters, two decades after the end of the apartheid regime.

Mmusi Maimane, aged just 34, joined the DA in 2009 and was fast-tracked through the ranks by Helen Zille, who stood down as party leader after eight years in office.

Zille did not publicly endorse Maimane, but he was the clear favourite to win the secret ballot.

“I don’t agree with those who say that they don’t see colour — because if you don’t see that I am black then you don’t see me at all,” Maimane told cheering delegates in his victory speech.

“Many young black South Africans continue to be denied access to opportunities, just as their parents were during apartheid — this is what we must change if we are going to succeed as a nation.”

At the end of his speech he paid tribute to his white wife Natalie, who joined him on stage as he received a standing ovation.

Sunday’s vote marked “a milestone for the DA and South African politics”, according to an editorial in the Sunday Times.

“For much of the past two decades, our political contest has been a black-versus-white affair, with the ANC seen as the party of the previously oppressed and the DA as a party of white interests.”

Raised in Soweto, the heartland of anti-apartheid resistance, Maimane broke away from his family’s ANC roots to join the Democratic Alliance.

Last year he was elected the party’s leader in parliament, where he has often locked horns with ANC lawmakers and President Jacob Zuma.

The DA has been pushing for legal action against Zuma over corruption allegations, and Maimane vowed to succeed in this pursuit.

“Make no mistake Mr President, you will have your day in court,” he told the racially mixed audience.

“Nobody is above the law. And, equally so, no political party has the divine right to rule this country.”

The ANC, which has ruled since 1994 when anti-apartheid icon Nelson Mandela became president, and remains the dominant force in politics, faces tricky local elections next year when the DA hopes to benefit from the government’s poor economic record and high unemployment.

But the radical leftist Economic Freedom Fighters (EFF) party is also on the rise, seeking to gather votes from working-class blacks frustrated with a lack of progress under the ANC.

In her farewell speech on Saturday, Zille said the selection of a new party leader would be “a turning point, not only for the DA but also for South Africa”.

Zille, 64, announced last month that she would be stepping down.

“Her resolute commitment to diversify the party’s leadership, membership and support base was one of the reasons we were able to double our votes in her eight years as leader,” Maimane told the party’s annual conference in Port Elizabeth.

The DA prides itself on liberalism and equal opportunity — as opposed to the affirmative action policies advocated by the ANC to overcome the legacy of the racist apartheid era.

The party has its roots in the now defunct Progressive Party, co-founded by the late anti-apartheid activist Helen Suzman in 1959.