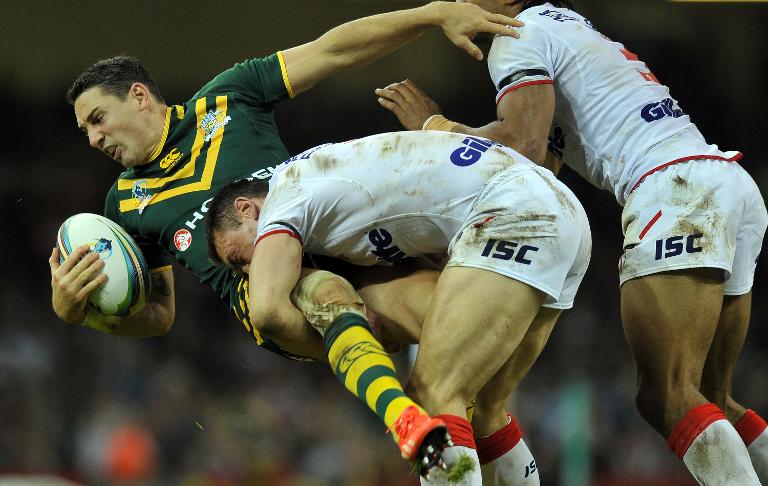 Test star Billy Slater made a triumphant return from injury with two tries in Melbourne Storm’s 28-10 win over Parramatta in Australia’s National Rugby League on Sunday.

In his first game since injuring his shoulder a month ago, the Storm fullback scored a double and set up another in a dynamic performance ahead of Queensland’s upcoming State of Origin series against New South Wales.

The win pushes Melbourne into second spot on the standings behind the Brisbane Broncos, while the defeat plunges the Eels towards the bottom of the ladder.

Meanwhile Brett Stewart and Daly Cherry-Evans put in masterful performances as Manly posted a 30-10 win over Newcastle at home on Sunday.

The Sea Eagles’ fullback and scrum-half had a hand in all of their points as Manly registered a second straight win, however they remain at the bottom of the standings.

Wayne Bennett’s Broncos celebrated representative back Darius Boyd’s return by snatching an 8-5 win over Penrith at Suncorp Stadium on Friday to lead the NRL competition after nine rounds.

Boyd made his return from a pre-season Achilles injury but it was scrum-half Ben Hunt who was the Broncos hero in setting up the match-winning try in the final seconds.

New Zealand Test scrum-half Shaun Johnson twice provided big plays in the final 10 minutes to give the Warriors a thrilling 20-16 win over Cronulla.

Johnson set up Solomone Kata and scored a try himself to give his side a pulsating win.

The lead changed hands three times in the final 10 minutes before Johnson sliced through to score the winning try.

The North Queensland Cowboys extended their run of wins to six straight after beating the Canterbury Bulldogs 23-16 in Townsville.

Cruising at 12-0 at halftime, North Queensland surrendered 16 unanswered points in the second half before late tries to Gavin Cooper and a superb 70m effort from Michael Morgan snatched the lead back. Test star Johnathan Thurston sealed the win with a 77th minute drop goal.

Defending champions South Sydney face the in-form St George Illawarra Dragons in the remaining game of the round on Monday.