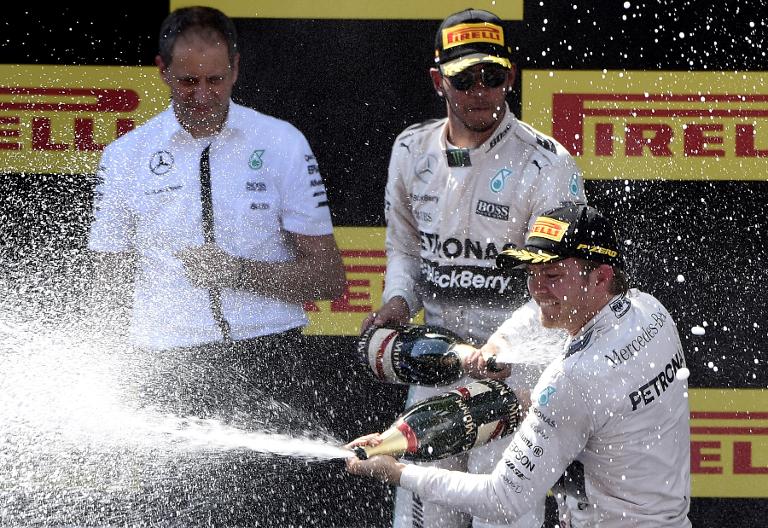 Nico Rosberg was left sighing with relief Sunday after he finally ended his Mercedes team-mate Lewis Hamiltonâ€™s winning streak in this yearâ€™s Formula One driversâ€™ world championship by claiming victory in the Spanish Grand Prix.

The 29-year-old German, who had been beaten by Hamilton in all four of this yearâ€™s â€˜flyawayâ€™ season-opening races, led from the 16th pole position of his career all the way to the chequered flag, his supremacy interrupted only by his pit-stops.

It was his first win since last Novemberâ€™s Brazilian Grand Prix and the ninth of his career, and trimmed defending champion Hamiltonâ€™s lead from 27 points to 20.

The result was also Mercedes’ 14th one-two by this driver pairing, equalling Ayrton Senna and Alain Prost at McLaren in the 1980s. It was also the German constructors’ 24th consecutive podium finish.

“It was a perfect weekend,â€ said Rosberg. â€œPerfect to be on pole and then to win the race like this. The car has been awesome all weekendâ€¦. Really perfect. And, finally, I got a perfect start. Itâ€™s been a long time coming.â€

Hamilton, who slipped from second to third at the start, fought back with daring and great skill, coupled to a three-stop strategy, to finish behind Rosberg and deliver another one-two for the dominant Mercedes team.

He said: â€œI just clearly got a bad start, got lots of wheel spin, but I’m grateful to get back up to second place. I havenâ€™t had such a bad start for a long time.

â€œI had lots of wheel spin, but as Nico said it was a good race and he did a good job. I’m grateful I could get the result for the team.

â€œThere’s a long way to go in the championship so, if this is a difficult weekend for me, I’ll definitely take it. Today was really a damage limitation exercise for me.”

Hamilton added that it was virtually impossible for him to overtake during the race because of the nature of the circuit. â€œIt didnâ€™t matter what you did, you could never get near enough and thatâ€™s a shame for this track.â€

Four-time champion Sebastian Vettel of Germany, who outpaced Hamilton off the grid, came home third for Ferrari ahead of Finns Valtteri Botta of Williams and Kimi Raikkonen, in the second Ferrari.

Vettel said: â€œWe were hanging in there pretty well. We had a good start and I was able to get past Lewis and then we did the right thing, covering him at the first stop.

â€œBut, when they switched to the three-stop, we couldn’t keep up. They were too quick today. We tried everything we could. Going through traffic is never easy. Sometimes you’re lucky and sometime you lose a bit more.”

Brazilian Felipe Massa finished sixth in the second Williams ahead of Australian Daniel Ricciardo of Red Bull and Frenchman Romain Grosjean of Lotus.

It was another day of disappointment for the struggling McLaren Honda team who extended their pointless start to the season. Spaniard Fernando Alonso retired after a brakes failure saw him narrowly avoid colliding with his own pit crew and Briton Jenson Button finished 16th.

In another dramatic pit-lane incident Grosjean also over-shot his pit-stop and sent a mechanic, clinging to the front jack, flying. He was, fortunately, reported not seriously injured.

Alonso said: â€œIt was scary. I had no brakes for the whole in-lap and, for the pit stop, it was even less. I’m disappointed for the retirement, but the only thing we can do now is investigate and come back stronger for Monaco.â€