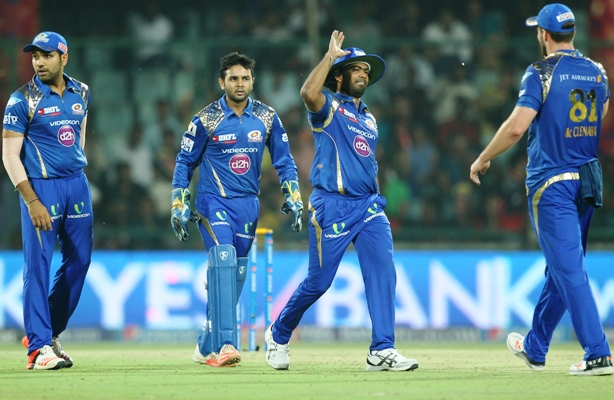 Mumbai: Royal Challengers Bangalore will have to pull out all stops to
prevent the Mumbai Indians juggernaut from rolling them over in what
promises to be a high-octane IPL cricket clash at the Wankhede Stadium
in Mumbai on Sunday.

MI are on a splendid winning spree, clinching five wins in as many
games to hold the all-important momentum ahead of their contest
against RCB, who are seeking a sixth straight win that would propel
them towards the play-off stage.

The brilliant show against Chennai Super Kings in the latter’s bastion
— Chidambaram Stadium — last night would certainly galvanise MI to
produce another good performance against RCB who have the advantage of
a well-earned rest before the difficult match.

That the brilliant four-wicket win over CSK in the latter’s den came
without the presence of their key death bowler Lasith Malinga, who was
unable to even go to Chennai because of political reasons, is a
feather in MI’s well-adorned cap.

With the Sri Lankan sling-arm bowler available to reclaim his spot in
the MI line-up, gangling South African pacer Marchant de Lange, who
filled in the breach and played his first game, is expected to be
benched.

MI’s impressive display has come on the backs of quite a few
match-winners like captain Rohit Sharma, big-hitting Kieron Pollard,
Malinga and Harbhajan Singh.

A lot many players have been putting their shoulders to the MI’s
pace-gathering process in the last few games which is a very important
factor in their fabulous run after tasting four straight defeats in
their first four games.

The openers — Lendl Simmons and Parthiv Patel — have started firing
and down the order while Ambati Rayudu has been a source of
inspiration whether setting a total or chasing an imposing one with
his calm demeanour and ability to clear the rope.

In bowling, after the injury to Corey Anderson, his New Zealand
compatriot Mitchell McClenaghan has stepped in to be counted along
with young left-arm spinner Jagadeesha Suchith.