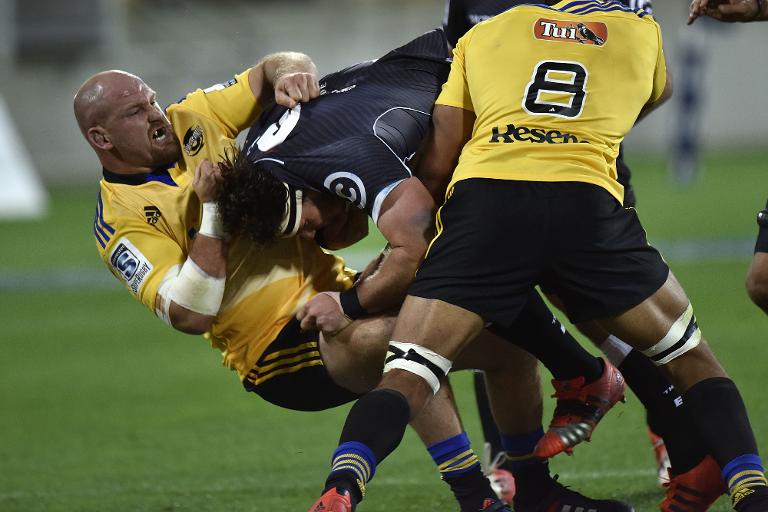 New Zealand’s Wellington Hurricanes moved well clear at the top of the Super Rugby championship with another bonus-point win as the Western Stormers regained the lead in the South African conference this weekend.

The Hurricanes won their 10th game of the season with a come-from-behind 32-24 victory over South Africa’s Coastal Sharks to open a 14-point gap at the top of the overall standings in the southern hemisphere provincial series.

The Stormers held off Australia’s ACT Brumbies 25-24 at home to knock the inactive Northern Bulls off the top of the South African conference and move into second spot overall behind the Hurricanes.

The Brumbies still lead the Australian conference despite their second successive loss after national league rivals the NSW Waratahs went down to the Western Force 18-11 in Perth.

Two-time winners Waikato Chiefs hold down fourth overall but slipped 10 points behind the Hurricanes in the New Zealand conference after this weekend’s bye.

The Otago Highlanders are fifth after they were pipped 28-23 in a thrilling second-half comeback by South Africa’s Golden Lions in Johannesburg.

The Bulls are sixth after their bye while seven-time champions Canterbury Crusaders swamped the Queensland Reds 58-17 in Christchurch to give legends Richie McCaw and Dan Carter a triumphant home farewell.

The Melbourne Rebels claimed a season-high sixth victory with a 42-22 win over the Auckland Blues in Melbourne to keep in the hunt for the top-six play-offs.

A late rally by the Hurricanes kept them well out in front of the chasing pack after trailing the Sharks three times during the match in Wellington.

The competition leaders scored 11 points in the closing minutes to turn a 21-24 deficit into a four-try bonus point victory.

Julian Savea and TJ Perenara were rested while Beauden Barrett and Dane Coles are injured, but despite being down on firepower, the ‘Canes ultimately proved more adept than the Sharks at playing for the full 80 minutes.

The Stormers overcame a 13-point first-half deficit in Cape Town to scrape home over the Brumbies.

But there could have been a different outcome had Brumbies centre Christian Lealiifano not fluffed a simple conversion of a try by flanker David Pocock with eight minutes left.

At Ellis Park, the Lions, trailing 20-3 at half-time, ran in three tries after the break while restricting the Highlanders to just a drop goal to claim victory.

Victory lifted the Johannesburg outfit three places on the championship standings to eighth.

The Western Force stunned the Waratahs for the second time this season with an unexpected win in Perth.

The Sydneysiders suffered what could prove to be a crucial blow to their title defence with the loss to the embattled Force, who finally ended a club record 10-match losing streak.

The Force’s only previous win was in the opening round against the Waratahs in Sydney.

The Crusaders posted an emphatic eight tries to two victory over the troubled Reds, keeping their slim play-off chances alive.

While winger Nemani Nadolo was the star of the show — scoring two tries and setting up two more — captain Kieran Read said the performance was about giving Carter and McCaw a fitting farewell in Christchurch.

The Reds later announced that former Reds and Wallabies coach John Connolly would begin work as a coaching consultant with doubts over the future of beleaguered head coach Richard Graham.

The improving Melbourne Rebels maintained their charge to the playoffs with a bonus-point five tries to three win over the Blues.

It was also a record night for the Rebels’ skipper Scott Higginbotham, whose 30th career try is the most by any forward in Super Rugby history.