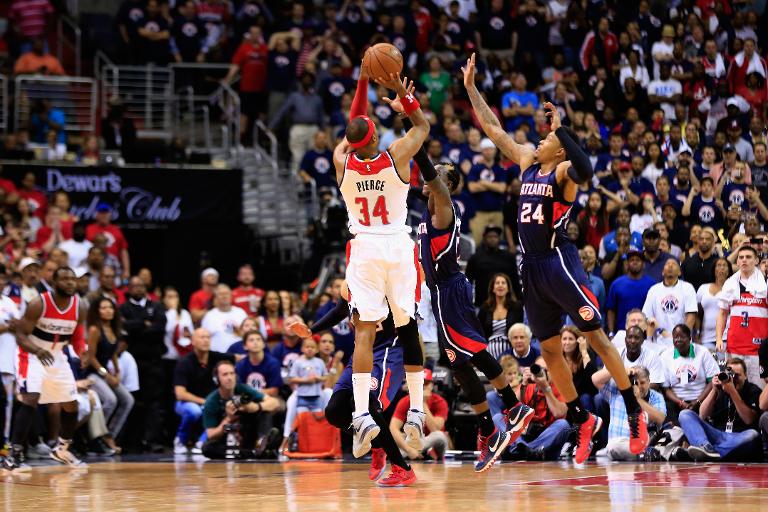 Paul Pierce banked in the game-winner to lift the short-handed Washington Wizards to a 103-101 NBA playoff victory over the Atlanta Hawks.

Pierce’s heroics gave the Wizards a two-games-to-one lead over Eastern Conference top seeds Atlanta in their best-of-seven second-round series — and thwarted the Hawks’ bid to rally from a 21-point fourth-quarter deficit.

There was no such drama in Memphis, where the Grizzlies took a 2-1 series lead over Western Conference top seeds Golden State with a 99-89 victory over the Warriors.

In Washington, Wizards coach Randy Wittman could afford to joke when the dust had settled.

“Had it all the way, huh?” quipped Wittman after watching his team squander a 21-point lead only to win it at the last gasp.

Washington’s All-Star guard John Wall, who has five fractures in his non-shooting left hand, watched from the sidelines in street clothes as his team built a comfortable lead, only to see it evaporate in the final 10 minutes as the Hawks, sparked by their reserves, stormed back with a 21-3 scoring run.

Mike Muscala pulled the Hawks level with a three-pointer with 14.8 seconds to play.

Pierce held the ball for the last shot and banked in a jumper as the buzzer sounded, sparking a wild celebration among his teammates.

“I’ve been in that situation many times,” the 37-year-old Pierce said. “If I miss, we don’t want them to be able to call a timeout.

“So I took my time and got my shot… I’m just happy we won. We didn’t want it to come down to that, especially how we played for the first 36 minutes, but a win is a win. We’ll take it.”

But it was the Hawks’ reserves who made a game of it, scoring 33 of Atlanta’s 35 points in the fourth quarter.

“I’m very proud of that group, the way they competed and got us back in the game,” said Hawks coach Mike Budenholzer, whose team will try to rebound when the Wizards host game four on Monday.

– Grizzlies impose their will –

In Memphis, Spanish big man Marc Gasol had 21 points and 15 rebounds and Zach Randolph scored 22 for the Grizzlies as they held off a Warriors team that had finished with the best regular-season record in the league.

“We just tried to come and impose our will, tried to play our game,” Randolph said. “It was a team win.”

But with Mike Conley back from surgery to repair a facial fracture, the Grizzlies won game two and Conley was again a key element on Saturday.

He scored a modest 11 points, but that included a driving layup with 39 seconds left that put the game away.

Curry finished with 23 points and six assists, connecting on just eight of 21 shots from the floor and two of 10 from three-point range.

Teammate Klay Thompson scored 20 points on eight of 13 shooting from the field.

The Grizzlies will try to stretch their advantage when they host game four on Monday.