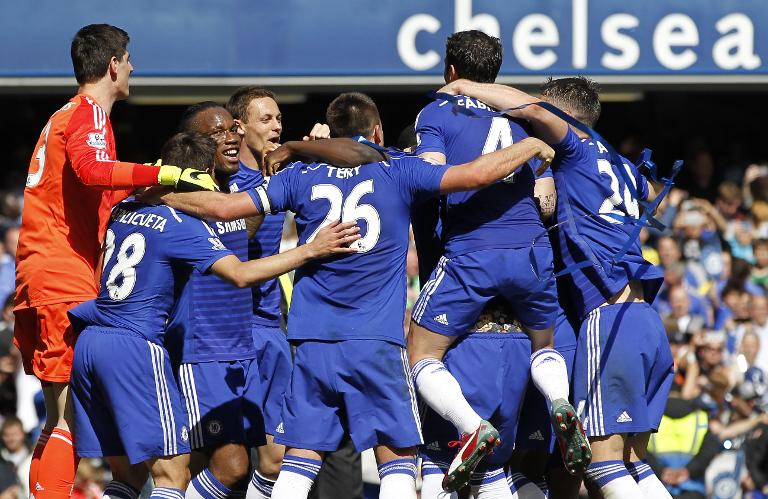 Liverpool must reluctantly subject themselves to the after-glow of Chelsea’s Premier League title triumph on Sunday as they attempt to keep their paper-thin hopes of Champions League qualification alive.

A year ago, the teams were vying for the title and despite Chelsea puncturing Liverpool’s late-season momentum with a 2-0 win at Anfield, it was Brendan Rodgers’s side who finished higher in the table.

Now, it is Chelsea who are champions, after last weekend’s 1-0 win over Crystal Palace, with Liverpool a huge 22 points behind them and in the unfortunate position of having to grant their rivals a pre-game guard of honour.

Manchester United’s 2-1 victory at Palace on Saturday left them seven points clear of Liverpool, and with a comfortably superior goal difference (+25 to +11), in the fourth and final Champions League qualifying berth.

Liverpool must therefore win their last three games to stand a realistic chance of a top-four finish, which would involve becoming only the second team to condemn Jose Mourinho to a home league defeat as Chelsea manager.

But midfielder Jordan Henderson says his side will draw extra motivation from having to applaud their opponents onto the pitch.

“You have to respect the team because they have been the best team over the season,” said the England international. “Of course it will be difficult doing that, but you have to pay your respects.

“You have to remember the feeling that it is what we want to achieve. You have to bottle that and make sure next season we can have a really good go and use it as motivation and drive to push on.”

Rodgers will take encouragement from his side’s performance on their last visit to Stamford Bridge, when Chelsea needed an extra-time header from Branislav Ivanovic to secure victory in a keenly fought League Cup semi-final.

Mourinho may also elect to rotate his squad, but he has set his players the target of finishing the campaign on 92 points by winning their last three games.

“We want to win our matches,” said the Portuguese, who gave his players an extended break after they secured the title last weekend. “We have three difficult games. We don’t need to win, but we want to try to win points.”

Sunday’s game will be the final time Mourinho comes up against Steven Gerrard in a Liverpool shirt before the Anfield club’s captain leaves for the Los Angeles Galaxy at the season’s end.

Gerrard’s slip against Chelsea 12 months ago sparked Liverpool’s finishing-straight collapse and the 34-year-old has endured a frustrating campaign, compounded by the recent loss to Aston Villa in the FA Cup semi-finals.

But Mourinho paid a handsome tribute to the former England skipper in his pre-match media conference, describing him as “one of my favourite enemies” and revealing that he had tried to sign him for Chelsea, Inter Milan and Real Madrid.

Gerrard has started three of Liverpool’s last four games, heading in a late winner against Queens Park Rangers last time out, and will hope to retain his place as he gears up for an Anfield send-off against Palace next weekend.

Daniel Sturridge will be out until September after undergoing hip surgery, but fellow striker Mario Balotelli could make his return against Chelsea following a foot injury.

Midfielder Lucas Leiva is in contention to start, but centre-back Mamadou Sakho remains sidelined with a hamstring problem.

Mourinho must once again decide whether to take a risk with top scorer Diego Costa’s troublesome hamstrings, which have kept the Spain international out of action for over a month.

“Diego wants to play, but I will protect him all the way,” Mourinho said. “We need to find a balance between the risk and the desire.”

Playmaker Oscar will definitely miss out due to a thigh problem that has ruled him out of Brazil’s Copa America campaign.