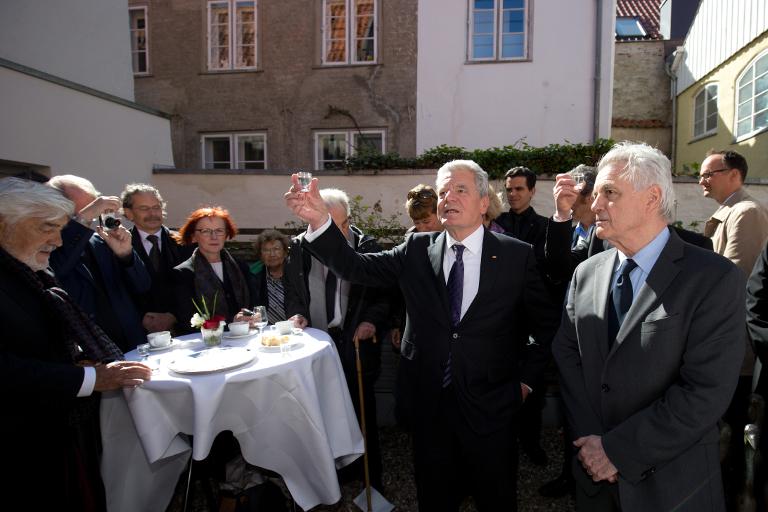 Germany bade farewell to its literary giant Gunter Grass on Sunday at a memorial service for the Nobel winner, who died last month aged 87.

His friend, US writer John Irving, gave the eulogy at the service in Luebeck’s theatre, attended by some 900 family, friends and admirers, among them President Joachim Gauck and other dignitaries.

Grass, who acted as a moral compass in post-war Germany but later provoked criticism over his own World War II past, died on April 13 in the northern city of Luebeck.

He achieved world fame with his 1959 debut novel “The Tin Drum”, followed by “Cat and Mouse” and “Dog Years”, all about the rise of Nazism in his native city Danzig, now Gdansk in Poland.

Irving, author of “The World According to Garp”, said the world no longer had authors like Grass, whom he saw as an idol.

“As a writer, Grass was one of the great ones,” Irving wrote shortly after his friend’s death.

“As a man, he held himself and his nation -â€“ meaning every nation, any nation, and each individual -â€“ accountable.”

Grass, also a poet, playwright and sculptor, was a left-wing, pacifist intellectual and one of Germany’s most influential if controversial public figures.

For decades Grass pressed Germany to face up to its Nazi past, winning the 1999 Nobel Prize for Literature for his “frolicsome black fables portraying the forgotten face of history”.

Culture Minister Monika Gruetters said Grass “like few others, was a critically corrective voice in democracy”.

But he also provoked an outcry in 2006 when he revealed, six decades after World War II, that he had been called up into Hitler’s notorious Waffen SS at the age of 17, saying he had stayed silent so long out of shame.

In 2012, he courted controversy again with the prose-poem “What Must Be Said”, that painted Israel as the Middle East’s biggest threat to peace, and voiced fears that the nuclear-armed state would mount a “first strike” against Iran.

The writer, sporting his trademark walrus moustache and often seen puffing on his pipe, had for the past 25 years lived in the village of Behlendorf near Luebeck.