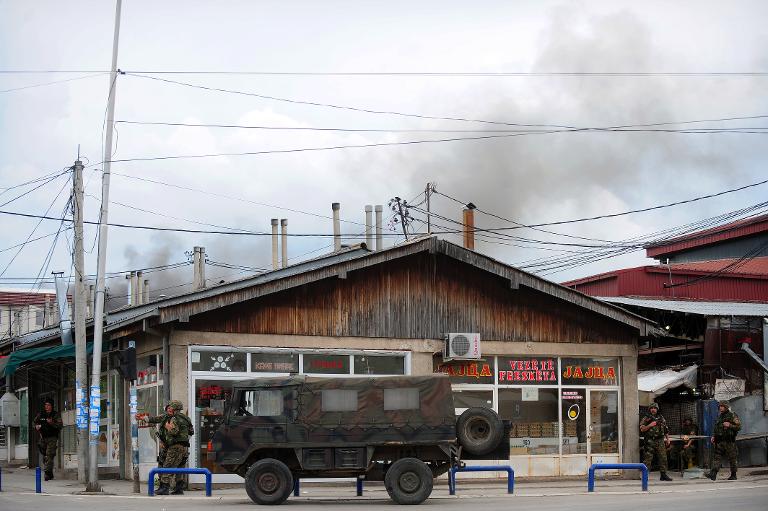 Macedonia, hit by a deep political crisis, was further shaken Saturday when five police officers were killed in clashes with unidentified gunmen among whom an unknown number also died.

“Five police officers were killed in a shootout with ‘terrorists'” and some 30 were injured in the northern town of Kumanovo, Interior Minister Gordana Jankuloska told reporters.

“There are victims among the terrorists but for the time being we cannot give the exact number,” she added.

Meanwhile, local papers in the Albanian language reported that five members of an armed group were killed in Kumanovo.

The clashes erupted during a dawn raid by police while local media said the police operation, which was still ongoing late Saturday, targeted am ethnic Albanian part of the town.

Jankuloska said the gunmen were planning to attack state institutions.

The gunmen were well-armed and had supporters in Kumanovo, police said earlier.

Macedonia’s ethnic Albanian rebels staged an insurgency in the Balkan country in 2001.

During Saturday’s police operation in Kumanovo, officers were met with “violent resistance” from snipers, grenades and automatic weapons, a police spokesman said.

The US embassy in Skopje had earlier issued a statement expressing condolences “to the families of the people killed and to those injured.”

Local media reported that some 30 members of the armed group were arrested, but there was no immediate independent confirmation.

Armoured police vehicles were deployed across Kumanovo, with officers clad in bullet-proof jackets as helicopters hovered overhead, according to an AFP photographer.

Shooting continued on Saturday evening, while dozens of people, mostly women, children and the elderly, were leaving the affected zone, some of them being evacuated by police, according to the photographer.

Police noted that “difficult terrain” was hampering the operation.

The incident comes less then three weeks after around 40 ethnic Albanians from neighbouring Kosovo briefly seized control of a police station on Macedonia’s northern border, demanding the creation of an Albanian state in Macedonia.

Ethnic Albanians make up around one quarter of Macedonia’s 2.1 million people.

In Tirana, the foreign ministry in a statement called for restraint “to prevent further deterioration of the situation which is not in favour of Macedonia’s democratic stability and prosperity.”

Pristina echoed the view as its foreign ministry called on “all sides to find a solution through a political dialogue.”

The 2001 Macedonian conflict ended with an agreement providing more rights to the community, but ties between ethnic Macedonians and Albanians remain strained.

Meanwhile, Macedonian opposition leader Zoran Zaev called on conservative Prime Minister Nikola Gruevski to address the public and “explain who was destabilising” the country and why, a statement said.

Since the beginning of the year, the government and the centre-left opposition have traded accusations including claims of wiretapping and million-euro bribes.

The crisis has not only undermined Macedonia’s already weak institutions but also sparked concerns within the 28-nation European Union, which it is seeking to join.

The former Yugoslav republic is also battling an economic crisis, with unemployment running at 28 percent.