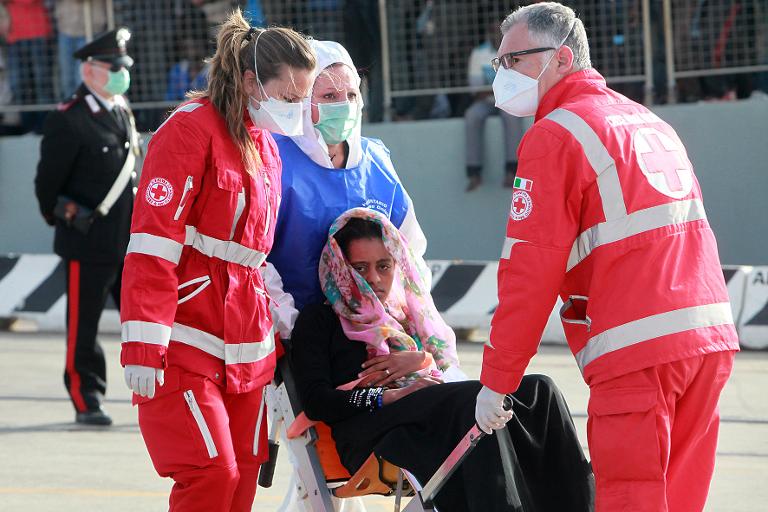 Defence ministers from five EU countries will meet Sunday for talks on a military campaign to stop human trafficking and reinforce the region’s defences against the flow of migrants from North Africa.

Officials from France, Germany, Poland, Italy and Spain will use events commemorating the 70th anniversary of the liberation of Lorient, western France, to discuss how to battle the new threat facing Europe that has already cost thousands of lives.

After some of the most deadly migrant shipwrecks ever seen in the Mediterranean this year, the ministers “will examine possible options for European (military) action,” according to the French defence ministry.

More than 5,000 refugees have died over the past 18 months as boats operated by smugglers have capsized off Libya’s coast, triggering alarm among European leaders seeking to halt the flow.

European Union foreign policy chief Federica Mogherini is set to present a plan to the United Nations Security Council on Monday that would see the UN lead military operations against the people smugglers.

The most controversial option under discussion would set out to destroy the boats used by the traffickers before they are loaded with migrants and sent out on the perilous journey to European shores.

Most set sail from the lawless shores of Libya, where the breakdown of government since the ouster of Moamer Kadhafi has allowed ruthless people traffickers to operate with impunity.

But critics say military action in Libyan waters or to stop a vessel flying the country’s flag without an international mandate would break international law.

UN Secretary-General Ban Ki-moon has also criticised the plan, saying that destroying boats could affect the livelihoods of Libyan fishermen, who may be forced into dealings with the smugglers to make ends meet.

For now, Brussels is concentrating on stopping unflagged boats and sharing intelligence on traffickers, according to EU sources. That could include information gathered from radar, aerial surveillance and wiretaps.

The aim is “to identify the points of departure, the security situation on the ground” and establish a multinational team of planning officers, said a military source in Paris.

European Commission chief Jean-Claude Juncker last week gave a withering assessment of the bloc’s defence policy, which he said was less effective than “a bunch of chickens,” calling for a more centralised military procurement strategy.

To this end, France and Germany are planning to jointly build a military observation satellite and this year hope to launch a project to develop a European drone with Italy.

Overall the EU is falling short of the NATO target to spend two percent of gross domestic product on defence — with the notable exception of Poland, which is undertaking a vast modernisation of its army.