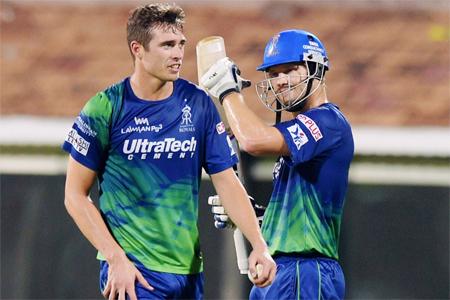 Chennai: Chennai Super Kings will look to avenge their first leg loss against Rajasthan Royals and consolidate its position at the top when the two former champions clash in a high-octane Indian Premiere League (IPL) cricket match at the MA Chidambaram Stadium here on Sunday.

CSK started their campagn with three back-to-back wins before their rampaging run was halted by Rajasthan Royals at Ahmedabad on April 19.

The two-time champions, however, didn’t lose their momentum as they notched up four more wins on the trot, before losing to Kolkata and Hyderabad.

They bounced back with a win against Royal Challengers Bangalore but lost to Mumbai Indians during their last outing and Mahendra Singh Dhoni’s men will now look to get across RR to get back to their winning ways once again.

Rajasthan too were on a roll from the start as they registered five straight victories, before losing to Kings XI Punjab in a Super Over on April 21. They lost to RCB next and then could just helplessly watch as two of their matches against KKR and RCB got abandoned because of weather.

Shane Watson’s men arrested the slide with a victory against Delhi Daredevils on May 3 but a resurgent Sunrisers Hyderabad brought back down once again last Thursday.

With six wins in 12 matches, Rajasthan are placed at the second position in the table and they would be eagar to find their touch and ensure a berth in the play-offs with another win in their penultimate league match tomorrow.

An experienced campaigner, Dhoni has led the Super Kings well as under him, the team has won seven out of 11 matches to top the table with 14 points.

The two-time champions boosts of a strong batting line-up with the likes of Brendon McCullum and Dwayne Smith doing a great job opening the innings. The middle-order is also well manned by Suresh Raina, Faf du Plessis and Dhoni himself.