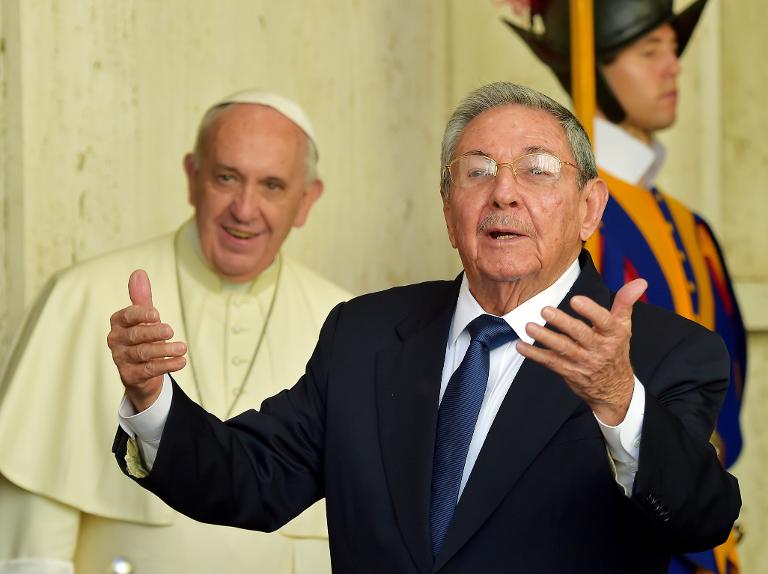 Cuban President Raul Castro met with Pope Francis at the Vatican Sunday, thanking the pontiff for his role in brokering an historic rapprochement between Havana and Washington, a papal spokesman said.

“Raul Castro thanked the Pope for his mediation between Cuba and the United States,” said Vatican spokesman Federico Lombardi of the exchange that also focused on Francis’ upcoming visit to Cuba.

The first South American pope played a key role in secret negotiations between the United States and Cuba, which led to the surprise announcement in December that the two countries would seek to restore diplomatic ties after more than 50 years of tensions.

During the meeting Castro offered the pontiff a painting by Cuban artist Kcho inspired by the plight of illegal immigrants stranded at sea — a subject close to the pope’s heart.

Francis in turn presented Castro a medal of Saint Martin de Tours, a French saint celebrated for having given his coat to a beggar, and urged others to “clothe and support the poor.”

Castro, who was accompanied by his Foreign Minister Bruno Rodriguez Parrilla, held a private hour-long meeting with the pontiff in a small room adjoining the Paul VI Audience Hall, where large gatherings are held in the Vatican.

Their discussions, conducted in Spanish, were described by the Vatican as “very cordial”.

Castro said he was “very struck” by the Catholic leader’s “modesty and wisdom” and promised to attend all the masses given by Francis on his Cuba visit in September.

“I read all the Holy Father’s speeches,” Castro said, adding that if the pope “continues to speak in this way, one day I will start praying again and return to the Catholic Church. And I’m not saying that as a joke.”

A dozen uniformed Swiss Guards stood to attention in front of the building when the limousine bearing the Cuban flag arrived.

The Holy See has revealed the Argentine pope personally mediated between the US and Cuba, and that the Vatican hosted delegations from the two countries in October.

The Vatican announced last month that Pope Francis would visit the Caribbean island in September, becoming only the third pontiff to do so after John Paul II in 1998 and Benedict XVI in 2012.

Jorge Bergoglio, then auxiliary bishop of Buenos Aires and now Pope Francis, accompanied John Paul II on the first papal visit to Cuba, during which John Paul II called for Havana to be brought in from the cold.

“Let Cuba open itself to the world, and let the world open itself to Cuba,” he urged, two years after hosting Castro’s ailing older brother Fidel for talks at the Vatican.

From Cuba, Francis will continue on to the US for a meeting with President Barack Obama.

He was to meet Italian Prime Minister Matteo Renzi in Rome later on Sunday.

The Catholic Church has consistently backed calls for the lifting of the US trade embargo against Cuba, while staunchly supporting Cuban Catholics and pressuring Havana to release political prisoners, many of whom are Catholic activists.

The Vatican has also kept its distance from Cuban exiles based in Miami, Florida, who have long clamoured for Havana’s Marxist regime to be ousted.

When the now retired Benedict XVI visited Cuba in 2012, he had lengthy, warm talks with Fidel Castro, who is now 88.

The Vatican’s mediation between Cuba and the US administration was a diplomatic success for the Holy See and had a considerable impact in mainly Catholic Latin America.

Other diplomatic efforts have been less successful, including a bid to help resolve the political crisis in Venezuela and a longstanding drive to encourage reconciliation between the Colombian government and guerrilla movements in that country.