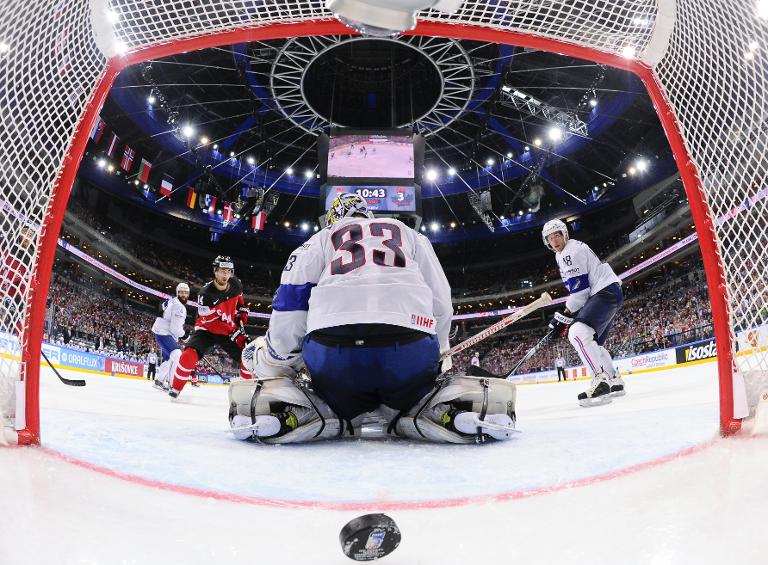 Canada kept their perfect record and stayed at the top of Group A at the ice hockey world championships after struggling to a 4-3 win over underdogs France on Saturday.

Seguin added a power play goal on 37 minutes, but France never gave up and levelled the score within 35 seconds of the 47th minute with goals by Yorick Treille and Damien Fleury.

Eberle then scored the game winner in a power play 50 minutes into the game as Canada outshot France 43-21.

In a clash of minnows in Group A played in Prague, Latvia needed only 18 shots to beat Austria 2-1 in overtime.

Brian Lebler put Austria ahead in the first period, but Lauris Darzins made it 1-1 on 32 minutes and Kaspars Daugavins handed Latvia a win only 33 seconds into overtime.

In the last Group A game on Saturday, Sweden beat Switzerland 2-1 in overtime with a 64th-minute goal by young Nashville forward Filip Forsberg.

Carolina forward Elias Lindholm scored for the Swedes in the eighth minute and Simon Bodenmann made it 1-1 just after the final period started.

Canada lead Group A ahead of Sweden, the Czech Republic and Switzerland.

In Group B played in the eastern Czech city of Ostrava, Russia swept Belarus 7-0, outshooting their rivals 32-13.

Former NHLer Ilya Kovalchuk opened the scoring in the 10th minute, and St Louis Blues forward Vladimir Tarasenko, Vadim Shipachyov and Artemi Panarin made it 4-0 before the second intermission.

In the group’s second game of the day, Finland beat Slovakia 3-0, earning the fourth shutout in five games.

Goalies dominated the game until the 51st minute when Joonas Donskoi scored the first goal, followed by Juhamatti Aaltonen five minutes later and by Toronto forward Leo Komarov who found an empty net seven seconds from the end as Slovakia had pulled goalie Jan Laco.

On Saturday evening, Denmark earned their first win at the tournament after beating Norway 4-1.

Nicklas Jensen scored for Denmark and Ken Andre Olimb put Norway level within the first three minutes of the game.

Denmark won the first period 2-1 on a power-play goal by Daniel Nielsen just before the siren.

Frederik Storm added another power-play goal in the second period and Julian Jakobsen made it 4-1 eight minutes from the end.

Russia, Finland and the USA sit at the top of Group B with 12 points each ahead of Belarus with ten.

The first four teams in each group will make it to the May 14 quarterfinals, while the last ones in each group — currently Austria and Slovenia — face relegation.