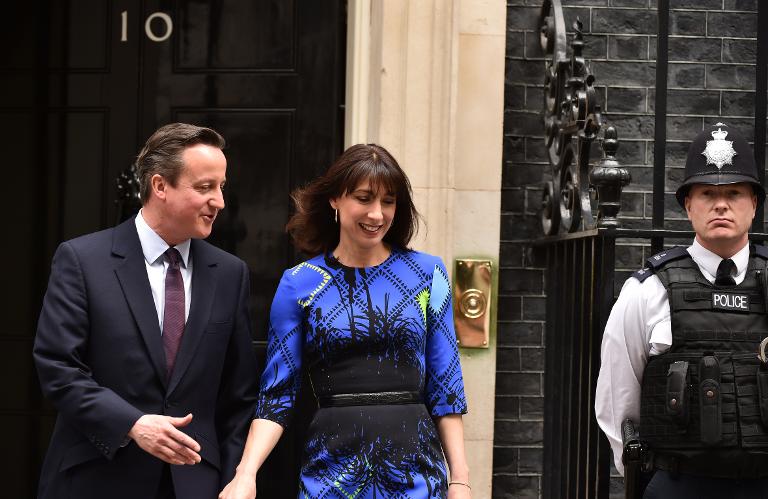 Britain was adjusting to a new political landscape on Saturday after a shock election victory for Prime Minister David Cameron that decapitated the opposition and bolstered secessionists in Scotland.

While Cameron spent the weekend drawing up his new team of ministers, the Scottish National Party (SNP) was celebrating its seismic gains, insisting it would not be sidelined in the new parliament.

Despite pollsters predicting that Cameron’s Conservatives would lose ground in Thursday’s vote, they won 331 of the 650 seats in parliament, giving the prime minister a second term in office — this time with a majority for his centre-right party.

While there were dramatic gains for the Conservatives and the Scottish National Party (SNP), the opposition was left in disarray after the Labour and Liberal Democrat leaders quit over their parties’ drubbings.

The UK Independence Party (UKIP) leader also resigned, after a huge swell in votes for the populist party translated into only one parliamentary seat.

Dozens of anti-austerity protesters unhappy with Cameron’s return to power clashed with police during a protest outside Downing Street on Saturday, leading to two officers being hospitalised and 17 arrests.

Anti-Tory graffiti was also daubed on a war memorial honouring the women of WWII in what the Royal British Legion called a “senseless act”.

The victory gives the Conservatives a freer hand than in Cameron’s previous government — a coalition with the Liberal Democrats — but the slender majority leaves them prey to rebellion from within their own ranks.

The Times said Cameron would need “every ounce of statesmanship” to surmount the challenges facing him.

“His majority is slim and using it will not be easy. His real work starts now.”

Cameron had already agreed to hold an in-out referendum on Britain’s European Union membership by 2017 due to pressure from the Conservative right wing and a rising UKIP, and he was quick to confirm his pledge on Friday.

There is growing concern in the business community about the referendum, even though Cameron has said he will campaign to stay in as long as he can negotiate reforms to cut down on EU migrants moving to Britain.

EU partners gave a taste of the tough talks ahead in their congratulations for his re-election, with French President Francois Hollande saying that there were “rules in Europe” to be respected.

Cameron will also face a tough battle to keep Scotland in the United Kingdom, and in a post-election speech pledged to grant sweeping new local powers.

Cameron has kept his four main ministers in place and boosted the nominal power of his finance minister George Osborne.

Former education secretary Michael Gove will become justice secretary while Nicky Morgan will stay on as education chief, it was announced Saturday. Chris Grayling and Mark Harper were also named in the new cabinet.

Cameron is expected to take until Monday to complete his cabinet fully, then finalise more junior ministerial posts over the coming week.

During the election campaign, Cameron named Osborne, interior minister Theresa May and London Mayor Boris Johnson as his chief possible successors, after pledging this would be his final term in office.

Centre-left Labour lost 26 seats and now has 232 MPs, while the centrist Liberal Democrats were eviscerated after five years in coalition with the Conservatives, ending up with just eight seats after losing 49.

In Scotland, the left-wing SNP won a historic landslide — 56 of the 59 Scottish seats — just seven months after losing a referendum on seceding from the United Kingdom.

“The people of Scotland on Thursday voted for an SNP manifesto, which had ending austerity as its number one priority,” party leader Nicola Sturgeon said as her MPs rallied Saturday at the iconic Forth Rail Bridge outside Edinburgh.

“No longer will Scotland be sidelined or ignored,” she said.

The Labour Party is set for a period of soul-searching as it starts choosing a replacement for Ed Miliband, who stood down as leader.

Former leader Tony Blair on Sunday told the party to ditch its shift to the left, saying that “the route to the summit lies through the centre ground.”

“Hard-working families don’t just want us celebrating their hard work; they want to know that by hard work and effort they can rise up, achieve,” he wrote in the Observer.

“They want to be better off and they need to know we don’t just tolerate that, we support it.”