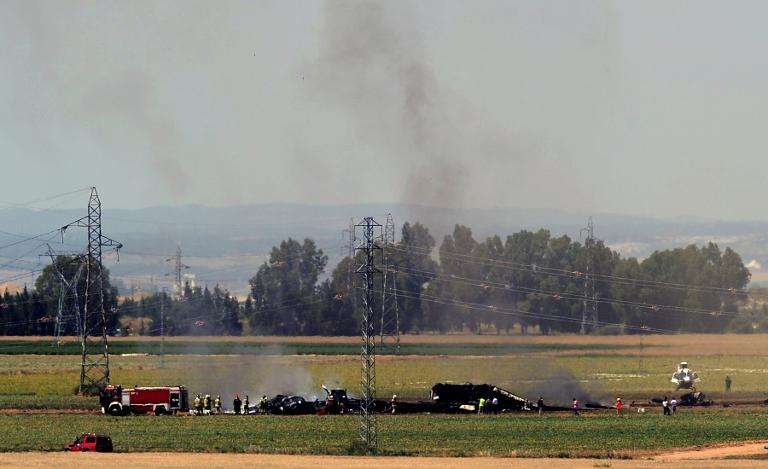 Spanish authorities on Sunday found the two cockpit recorders of the Airbus A400M military plane that crashed near Seville airport, killing four people, as Britain, Germany and Turkey grounded their models of the aircraft.

The recorders were found at the scene of Saturday’s crash and turned over to the judge who is leading the judicial investigation into the accident, the public works ministry said in a statement.

The military transport plane crashed in a field and burst into flames just north of Seville’s airport after hitting a power line during an apparent attempt at an emergency landing.

Four people on board died while another two, a mechanic and an engineer, were taken to hospital where they are listed in serious but stable condition.

Dozens of investigators, some wearing a protective white suit, scoured the crash scene on Sunday for clues into the cause of the accident.

Aircraft manufacturers equip all their planes with two black boxes â€“- a flight data recorder and a cockpit voice recorder.

The flight data recorder records a stream of flight information such as altitude and air speed, while the cockpit voice recorder stores conversations and other noises made in the cockpit.

The plane, due for delivery to the Turkish air force in June, was one of the new A400M troop and vehicle transporters manufactured by European aerospace group Airbus.

The crash was the first involving one of the aircraft, which Airbus assembles at a plant in Seville.

Britain, Germany and Turkey said they would temporarily stop flying their A400M transport planes until the causes of the accident were known.

France, the largest operator of A400Ms, said it was not grounding its planes at this point.

“We have no reason to lead us to stop our A400 fleet,” said Colonel Jean-Pascal Breton, head of the press service of the French air force.

Malaysia, which received its first A400M plane in March, has not yet announced its position.

There are a total of 12 A400M planes in use at the moment — France has six, Britain and Turkey have two each and Malaysia and Germany each have one.

The Spanish government said it would form a joint commission involving the budget and defence ministries to investigate the accident, which is also being probed by Spain’s Guardia Civil police.

Airbus Defence and Space, the division responsible for military aircraft, sent a team of experts to the crash scene to help with the investigation.

The A400M programme has been beset by problems since it was launched in 2003.

In addition to production and delivery delays, the programme ran 30 percent — or 6.2 billion euros ($7 billion) — over budget.

In 2010, Airbus mulled scrapping the entire project amid doubts about its financial viability.

In the end the programme was maintained, but not without renewed troubles.

In January, Airbus CEO Tom Enders offered an apology to British officials for continued delays to seven A400M aircraft earmarked for delivery in 2015.

He described industrial reasons for the delays as “not catastrophic” but sufficiently “embarrassing” to merit remedial measures.

Airbus — which was previously forced to set aside 551 million euros from 2014 earnings to pay for continued delays — has yet to reveal a promised new delivery schedule for A400M planes.

“We have the best engineers, a huge capacity for design, we have phenomenal companies and I think this is something that needs to be investigated but the A400M is a top-notch plane,” he said.