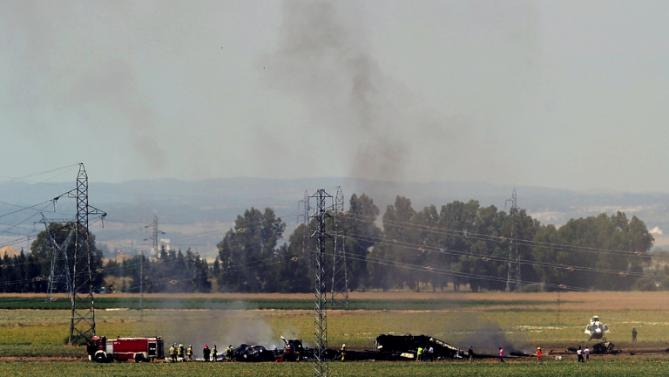 Andalusia’s regional prefect Antonio Sanz said a burnt body had been found in the wreckage, raising the death toll to four. A spokeswoman for the emergency services had earlier reported at least three people were dead and two seriously injured.

She said the authorities were still trying to establish how many people were on the plane when it went down in a non-residential area, around a mile from the airport.

The airport was closed to traffic for about an hour after the crash. A thick plume of black smoke was seen in the vicinity of the airport.

Prime Minister Mariano Rajoy, who received the news on a campaign visit to Tenerife, one of the Canary Islands, spoke of “eight to 10 people on board.”

The Prime Minister, who was due to visit the crash scene, expressed his condolences to the victims, Spanish news agencies reported.

Aviation sources confirmed the plane was one of the new A400M troop and vehicle transporters manufactured by European aerospace group Airbus.

Airbus Defence and Space, the Airbus division responsible for military aircraft, said the plane was destined for Turkey, but did not immediately say how many people were aboard.

The group sent a team of experts to the crash scene.

If confirmed as an accident, it would be the first since the plane, which is assembled at a factory in Seville, went into service.
Â