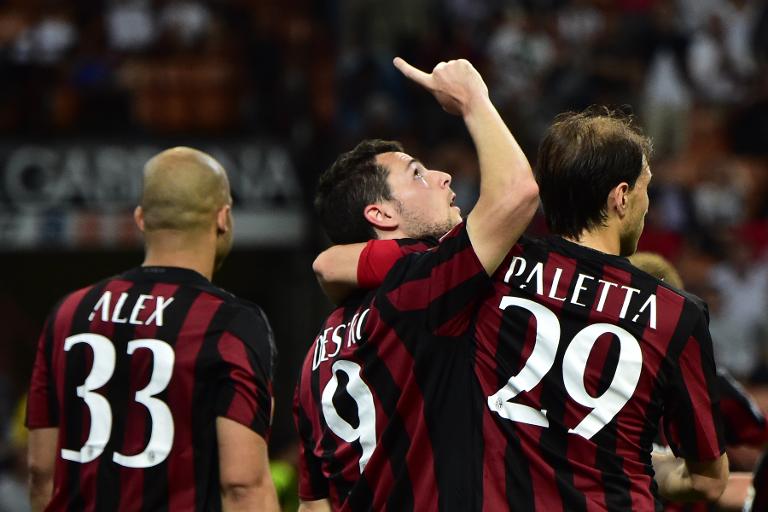 Roma failed to strengthen their grip on second place in Serie A after goals from Marco Van Ginkel and Mattia Destro saw struggling AC Milan win 2-1 to blow the race for the Champions League wide open.

Van Ginkel’s first Serie A goal five minutes before half-time and a close range header from Destro just before the hour mark were enough for Milan to win for the first time in six games, despite a Francesco Totti penalty letting Roma back into the game 17 minutes from time.

â€œIt was a special game for me and I really wanted to do well in front of our fans,â€ said Destro, who is on loan from Roma and has an uncertain future at Milan.

â€œThe important thing was to get a goal, as I hadn’t scored for a while and strikers need goals. What will happen next season? I donâ€™t know, we are all waiting for the end of the season and then weâ€™ll see.â€

Rudi Garcia’s Roma stay second on 64 points but they are only a point ahead of local rivals Lazio, who host Inter Milan on Sunday night, after a disastrous display that puts their Champions League credentials in doubt.

His side could also find fourth-placed Napoli only two behind them at the end of the weekend should Rafael Benitez’s side win at already-relegated Parma as expected.

â€œAt the end of the game I saw my players ask the referee why there were 30 seconds less played than there should have been, but we lost an hour of the game. This is the problem,â€ said an angry Garcia.

â€œWe started well in the first 20 minutes, created a couple of chances, but after that we fell into a lazy rhythm, and sat back too much for a match this important. Maybe they didn’t realise that there were still four games to go.â€

Roma have three games left and in theory have the easiest run-in, with the Rome derby on the penultimate round of the season sandwiched between winnable home games against Udinese and Palermo.

Lazio meanwhile have got to face Europa League-chasing Inter and Sampdoria, with a potentially crunch clash with Napoli coming on the last day of the season. Napoli for their part also have to travel to Juventus the evening before the two capital clubs face off against one another.

â€œWe’ve got three cup finals that we have to play in a different way compared to tonight if we’re to win,â€ added Garcia.

Defender Luca Rossettini struck five minutes from the end in Turin, pouncing on the rebound off the post of his own header to cancel out Pogba’s 45th-minute opener, and close the gap between third-from-bottom Cagliari and Atalanta, who travel to Palermo on Sunday, to five points.

Pogba was the best player on the pitch before being substituted an hour into the match, but coach Massimiliano Allegri said that he was undecided whether he would start against Real Madrid on Wednesday when Juve try to a defend a 2-1 Champions League semi-final first leg lead.

“I will assess the situation between now and Wednesday, but I’ve seen in training that he’s in good physical condition. He’s a young lad and he’s in good shape,” said Allegri.

â€œWe know that the Madrid game will be difficult because they have players with great technique, and we will have to play much more offensively. We have to score, because if we don’t it will be really hard to go through.â€