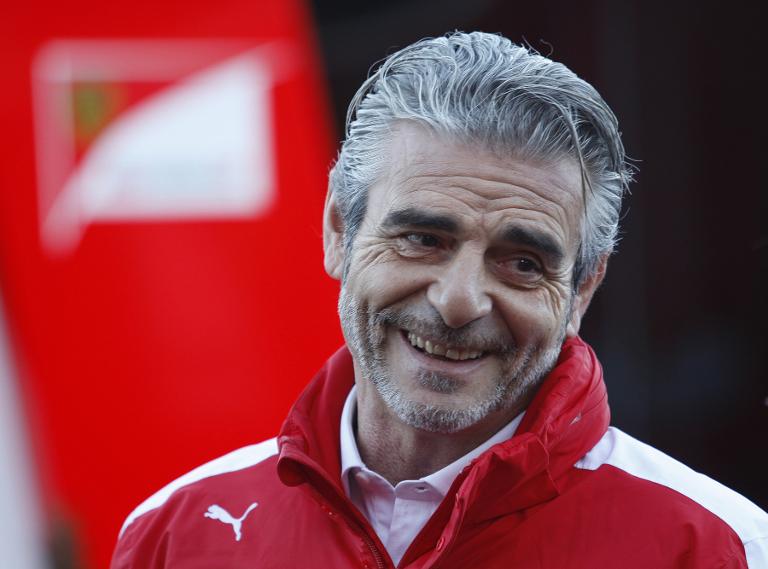 Ferrari team chief Maurizio Arrivabene was wearing a black sling Friday as he patrolled the Italian teamâ€™s garage and pit wall at the Spanish Grand Prix.

It was emblazoned with the number 27 and signalled a respectful memory of one of the scuderiaâ€™s most revered drivers, Canadian Gilles Villeneuve, who died at Zolder, in Belgium, on this day in 1982.

During afternoon practice, current Ferrari driver Kimi Raikkonen, an instinctive racer, complained of boredom when asked to continue lapping the track in a session that, to him, offered little sense of purpose.

His maverick attitude provoked a ripple of laughter as it was relayed, via a broadcast of the teamâ€™s radio communications, to reporters in the media centre at the Circuit de Catalunya. â€˜Give him an ice-creamâ€™, was the universal cry.

The two incidents are linked. Together, they offer an insight into what has changed at Ferrari this year â€“- and explain why, in part, the team appears to be happier, the drivers more determined and the cars are going faster.

A management revamp has changed the atmosphere and rekindled Ferrariâ€™s humanity.

Another reason is the way in which four-time champion Sebastian Vettel has settled in after moving from Red Bull.

His humour and energy have fitted perfectly with the new regime ushered in with Arrivabene whose sling is a legacy of recent arm surgery.

Only a lunchtime delivery of Lambrusco is required now to help revive memories of the old days when team founder Enzo Ferrari was still in charge and the mechanics were â€˜fed and wateredâ€™ in a traditionally Italian fashion.

If 2014 was a year of dark and unrelenting misery for most at Maranello, as the company president Luca di Montezemolo, number one driver Fernando Alonso, two bosses and a series of other senior staff departed, then 2015 has, so far, seen the sun shine again.

This has been manifested most clearly in the behaviour of Raikkonen.

A career worst 12th in the championship last year, he has shaken off that forlorn form.

In Bahrain, three weeks ago, he beat Vettel and finished third, claiming his first podium since 2013.

On Thursday, in Barcelona, he was reported to have revelled in a chance to speak and enjoy himself when invited to make an appearance at a marketing function.

In the past, he has been known to regard three successive words as a long answer.

â€œI know Maurizio from before [when he worked for Ferrari sponsor Marlboro] and we had a very good relationship. Yeh, there is a difference (in) how the teamâ€™s being run this year and how things are being done inside the team.

â€œI think itâ€™s only a good change and itâ€™s the only way how it should be run and be good for the team.â€

After years of an un-Italian pursuit of technical brilliance allied to a more sterile style of management, Arrivabene has apparently brought back unchecked emotions.

Hugs are back in fashion and Latin passion, once a Ferrari clichÃ©, is apparent again.

For Raikkonen, it has delivered a return of equality between the two drivers and encouragement to compete, in the interests of the team.

â€œIn the end Ferrari wants Ferrari to win and they will give us both the same chances and fair treatment so it is up to us. We try to behave as well as we can against each other. If we have to race, we try to beat each other, but in a good way, and in the interests of the team. Itâ€™s a lot better than it was last year.â€