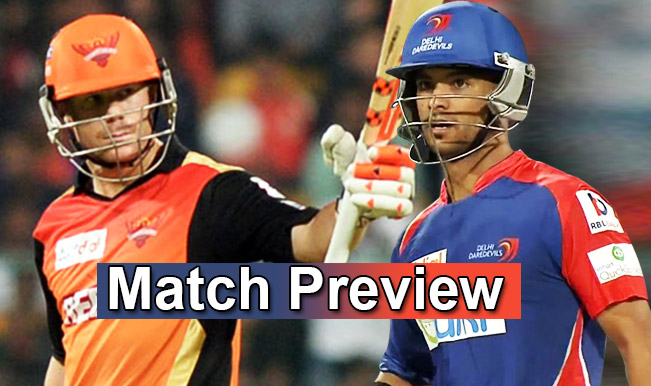 New Delhi: Their play-off hopes somehow still alive, inconsistent Sunrisers Hyderabad would look to get yet another win under their belt when they take on struggling Delhi Daredevils in an IPL cricket match, in Raipur on Saturday.

Sunrisers Hyderabad kept themselves in the play-off fray by pulling off a seven-run victory over Rajasthan Royals at the Brabourne Stadium in Mumbai yesterday. Sunrisers have blown hot and cold right through the tournament and are currently placed at the fifth position in the points table, courtesy their yesterday’s win over the Rajasthan outfit. Lack of consistency has been Sunrisers’ bane in this tournament so far.

They showed signs of returning to form in their 22-run win over league leaders Chennai Super Kings last Saturday but slumped to defeat against defending champions Kolkata knight Riders on Monday.

But as has been the case so far, the Sunrisers returned to winning ways and from here what they need is consistency in their performances if they desire to make it to the next stage of the Twenty20 tournament.

In yesterday’s win over Rajasthan Royals, Sunrisers rode on contrasting fifties from Shikhar Dhawan (54) and Eoin Morgan (68 off 28 balls) to post a mammoth 201 for 4. Skipper David Warner (24) and Moises Henriques (20) also got starts before fading away and come tomorrow Sunrisers would be looking forward to an explosive knock from its captain up the order.

They have a good seam bowling attack led by the likes Trent Boult and backed up by Indian seamers such as Bhuvaneshwar Kumar, Ishant Sharma and Praveen Kumar but their pacers need to tighten their noose as they leaked runs yesterday before somehow managing to restrict the opponent.

On the other hand, the Daredevils campaign has simply faded away after a promising start. The Delhi outfit slumped to its seventh loss of the season — second on the trot — last night and the JP Duminy-led side is more or less out of the Play-offs contention.

The Daredevils started the season with a lot of promise with big signings in Yuvraj Singh, Angelo Mathews and Zaheer Khan, but now face the prospect of an early elimination if they don’t pull up their socks from here.
Â